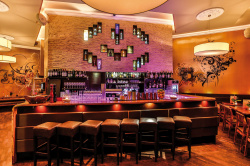 The Harvey`s - For breakfast with Elton John and Hape Kerkeling

Their names are "Rosa von Praunheim", "Dirk Bach", "Hella von Sinnen" or "Elton John" - the names of the breakfast offers alone show that Harvey's is a special place in Frankfurt Nordend. What makes the restaurant special is not only the names on the menu, or the very special atmosphere created by the interior. Rather, it is the quality of the food and drink on offer - whether for breakfast or in the evening - that has made Harvey's what it is known as - "Szenelokal" (trendy restaurant) - known throughout Frankfurt over the years.

Named after Harvey Milk, one of the most important figures of the American homosexual movement, the restaurant is by no means geared to the gay scene of the city. Rather, a very colourful audience can be found here, who come together for an extensive breakfast, a relaxed afternoon coffee or a cheerful evening with drinks and tasty food.

Versatility and quality are already written in capital letters at breakfast. Against the small hunger "Dirk Bach" helps with croissant, rolls, jam and Nutella. Hella von Sinnen" with its fruit, vegetable sticks, herb curd cheese, muesli and wholemeal bread is a little richer. Those who like it hearty will turn to "Elton John", who then has sausages, beans, organic mirror eggs with bacon and cheese ready to go against hunger. The omelettes are also very tasty, for example with tomato and basil or as farmer omelettes with fried potatoes. To round off your breakfast or for lunch coffee, it is definitely worth ordering Brussels vanilla waffles - simply delicious!

But even after breakfast a visit to Harvey's is worthwhile. The drinks menu is enormously extensive and offers a good selection of hot and cold drinks, wines, cocktails or long drinks. The menu offers smaller dishes such as Harvey's curry-worscht, green sauce or the delicious club sandwich, as well as various salads, tarte flambée, burgers, schnitzel or rump steak. Hungry really nobody has to go home here.

The harmonious ambience, the cordial service and the good quality of drinks and food are decisive factors for the success of the Harvey. And since word has spread far beyond the borders of the North End, it is advisable to make reservations in advance, especially on weekends.

You will find more information under: http://harveys-ffm.de/