For the fifth time, the International Women's*Theatre Festival will take place in Frankfurt from Monday, September 13 to Sunday, September 19. The festival is organized by Protagon e.V. together with the network "The Magdalena Project". It will take place on the cultural grounds of the association in the east of the city. The theme of the year, "Womxn Performing Selves", is intended to encourage women* to exchange ideas and develop new models of feminist collaboration.

The festival will feature contemporary and multimedia performances daily from 17.00 contemporary and multimedia theatre as well as performances, live music, video installations in the "Pandora's Box" and a symposium on this year's theme. In addition, this year the festival will also host performances in public spaces around the city, taking the theme of women* outside. The festival grounds will also feature culinary offerings and get-togethers at the outdoor bar with musical accompaniment from bands and DJ*ane's.

Access to the festival grounds, as well as the theatrical events, performances and other cultural offerings, is on a donation basis. The Festival assumes the responsibility to avoid any potential risk of infection to anyone attending and will consider all protective measures to contain the COVID19 virus.

The Theatre of the Future is Diverse, Multimedia and Intercultural. Highlights of the 2021 theater program include:

September 16, 2021, 9:00 p.m.: "The Unavailable" Lecture-Performance by The Frankfurt Embassy, dedicated to the French resistance fighter and scholar Germaine Tillion (1907-2008).

September 19, 2021, 9 p.m.: "NORA" by 7women Company (ensemble from Berlin), a play about decision-making - the inner dialogues, the fear of jumping, the courage of nothingness, the pleasure of uncertainty, the rediscovery of a new zest for life.

Twelve workshops will take place during the festival period. They are dedicated to women* and girls* - artists as well as women* who do not come from the theatre - who want to experience innovative and creative processes in mutual exchange.

Among others, Anna Barros from Chile invites to Groove Dance Studios with "Una a Una" for an exploration for women* in public space. There will also be workshops for BIPOC women* led by Barbara Luci Carvalho and Amelia Uzategui. On September 18th the workshops will be part of the Tanztag Rhein Main with a specific registration. There is no fee for other workshop registrations.

More about the program is available at www.iftf-frankfurt.com 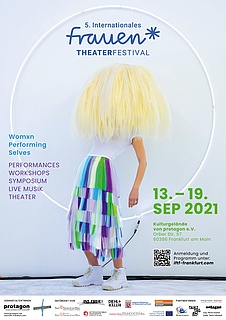