A woman flees a message

A son goes to war, voluntarily. What's left for the mother? To wait. Waiting to see if the son survives. Or whether instead of his one morning officers are standing at the front door with the news that Ora fears everything: that her son Ofer has fallen. But Ora refuses this role. She protests by fleeing. Will she succeed in protecting her son by preserving him in her memories, stories and thoughts? - David Grossman is one of Israel's most important contemporary authors. His novel, published in Germany in 2009, was written in the midst of the mourning for Grossman's own son Uri, who died in the Second Lebanon War in 2006. Grossman describes the indissoluble entanglement of the people on both sides of the Middle East conflict, their suffering, their courage and their hopes - a strong plea for peace that is shown for the first time on a German-language stage in the production of Jessica Glause.

Text source and further information about this event: https://www.schauspielfrankfurt.de/spielplan/eine-frau-flieht-vor-einer-nachricht/3318/ 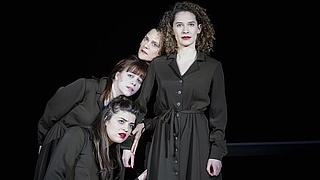