In the Fritz Rémond Theater at the Zoo you can witness the meeting of two dissimilar people who have one thing in common: Death. The encounter leads to a very special night, which changes one thing above all: The view of one's own life. On the one hand, there is Arthur, who has taken up residence in a hotel in Amsterdam. Here he wants to say goodbye to life over an exquisite dinner. Arthur, a sports teacher and convinced non-smoker, is suffering from incurable lung cancer. According to the diagnosis, he has only a few months left in this world. He has decided to put a dignified end to his life the next day in a hospice. But his quiet farewell is disturbed by terrible music blaring from the next room. The music comes from Claire, who wants to hang herself in the next room.

Happily, it doesn't seem to have worked yet. Just as the attempt to slit his wrists and swallow pills was unsuccessful. The realization that both of them want to put the same plan into action makes them speechless despite all their amusement. Then Arthur's spirits awaken. Not for himself, but for the young woman, in whom he senses no serious death wish and the necessity for such an irreversible step, despite bad blows of fate. A heated argument about the meaning of a life not exactly outshone by happiness culminates in the compromise to spend the last evening together.

"Arthur and Claire" is a wonderful play about two people on the run that one night - he from his death, she from her life. The play by Stefan Vögel is a rousing mix of tragedy and comedy that entertains very well while also making you think. The play makes its audience laugh, but also brings tears to their eyes. Despite the rather heavy topics it deals with, you are not left with a depressing feeling at the end, but a very life-affirming mood full of hope. 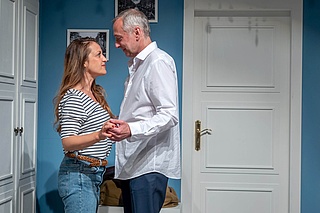