party in the foyers with the Mama Shakers from Paris and the Oliver von Essen Trio, as well as a midnight session by the Barrelhouse Jazzband

Uninterrupted Tradition: Every year, for many decades, classic jazz moves into the Alte Oper Frankfurt in autumn, when the Barrelhouse Jazzband invites you to a concert and party. Even in the pandemic-plagued year 2020, the big autumn date could take place, although last year the usual party following the concert had to be cancelled. In 2021, the carpet will once again be rolled out for swing and blues at the Alte Oper when the Barrelhouse Jazz Party is celebrated on Saturday, October 23. The combination that has been tried and tested for decades is planned once again: at 8 p.m. the Barrelhouse Jazzband and its musical guests will bring New Orleans jazz and its lively varieties to the Great Hall. And afterwards, around 11 p.m., there will be a relaxed party in the various foyers of the Alte Oper - at least if the current situation allows.

For the concert in the Great Hall, the Barrelhouse Jazzband has invited top international soloists: Jesse Jones from the USA combines exquisite saxophone playing and singing with a good portion of entertainment. His compatriot Stanley Breckenridge provides stirring blues and swing with his voice and on the piano. Also from the USA is trombonist Dan Barrett, who has played in film scores by Woody Allen, among others. And finally, one of Europe's most dazzling swing trumpeters, Britain's Colin Dawson, is in the mix.

The party afterwards will be enlivened by the Mama Shakers from Paris, the Oliver von Essen Trio and the Barrelhouse Jazzband, who will once again see the audience off into the night with their midnight session. Any necessary spacing or changes will be announced well in advance. 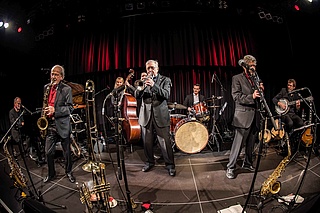