Hex, Hex: Bibi Blocksberg, probably the most famous little witch in Germany, is coming to the Tent Palace at Deutsche Bank Park with her musical "Alles wie verhext!". Fittingly for the 40th anniversary of the series, the new original COCOMICO musical can be experienced LIVE up and down the country!

Four successful Bibi Blocksberg live musicals from the pen of producer and author Marcell Gödde and his COCOMICO Theater have already been seen by 1.2 million spectators in over 1350 performances.

Everyone knows it, there are days when just everything goes wrong! It starts in the morning when you get up on the wrong foot and continues throughout the day. Then it's just "everything is jinxed!". This is the kind of day that the cheeky little witch Bibi Blocksberg has to deal with. Already in the morning there is a huge mess at home with her parents Barbara and Bernhard Blocksberg. And at school, too, nothing seems to work out. Bibi's teacher, Mrs. Müller-Riebensehl, is really upset about it! In the evening it's Walpurgis Night on Blocksberg. This year Bibi and Barbara Blocksberg are supposed to light the big Walpurgis Night bonfire there together with Grandma Grete. But what will Walpurgia, the chairwoman of the witches' council, say when everything goes wrong there too? There's really something going on!

Will the witches of the Blocksberg family succeed in lighting the Walpurgis Night bonfire as planned on this "bewitched" day? The small and big witch fans in the hall can even help Bibi, her mother and her grandmother, because in this family pop musical participation is urgently desired - even dressed up. Little and big witches in costumes are very welcome! And if, with the help of the children and all the spectators, everything turns out well, Karla Kolumna, the raving reporter from Neustadt, will be able to write with peace of mind: It WAS all like bewitched. 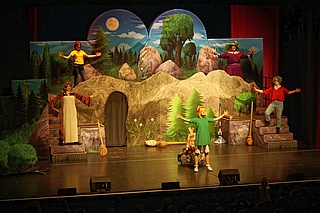