Catastrophe. What comes after the end?

You could almost think that we are currently living in one of those typical disaster movies from Hollywood. Pandemics, climate change - hardly a day goes by without new bad news of global proportions. So you'd almost think that the new exhibition "KATASTROPHE. What comes after the end?" at the DFF - Deutsches Filminstitut & Filmmuseum could not have come at a more appropriate time. Yet planning for the show was underway long before the outbreak of the Corona pandemic, which was then ironically responsible for the delayed opening of the exhibition.

The look at the history of disaster films was created in cooperation with the Senckenberg Naturmuseum. The result is an exciting combination of cultural studies and natural science. For example, films are commented on by four scientists and examined for their plausibility. While the short versions can also be discovered in the Senckenberg Naturmuseum in the appropriate departments, the long versions of this fact check can be studied in the DFF. But of course the exhibition has much more to offer.

It is structured according to the classic pattern of disaster films. In a total of six sections, it uses film clips, set designs, movie posters, magazine articles, postcards and other exhibits to reveal how disaster films function as a portrait of the mores and emotions of their time, showing what people were most afraid of at a particular time. It's exciting and entertaining - and makes you want to watch some of the genre's classics again.

The opportunity to do so is available in some cases at the extensive accompanying program, which of course includes a film series that will be shown in the DFF's cinema. But guided tours, an interactive quiz, additional digital information via QR code and more will also be offered in addition to the classic exhibition visit. Those who want to delve deeper into the subject matter afterwards can purchase the extensive catalog on "KATASTROPHE. What comes after the end?" in the museum shop. The 172-page book with all kinds of text contributions and images is available in German and English. 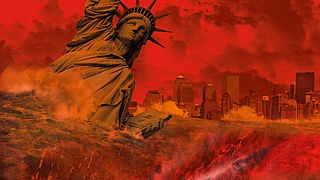