The COLOURED GODS are back. Twelve years ago, the exhibition about the colourfulness of ancient Greek and Roman sculpture already inspired the people of Frankfurt. But not only here was the interest enormous. A total of about 3 million visitors were able to experience the exhibition in museums such as in Athens, Istanbul, Copenhagen, London, Malibu, Mexico City, Munich, Berlin, Rome as well as Vienna and most recently in San Francisco. Now the BUNTEN GÖTTER have returned to the Liebieghaus Skulpturensammlung. Since the end of January, a large, expanded exhibition has been on view there, offering a new, differentiated view of the irritating phenomenon of statue polychromy.

"BUNTE GÖTTER - GOLDEN EDITION. The Colours of Antiquity" shows more than 100 objects from international museum collections such as the British Museum in London, the Museo Archeologico in Naples, the Ny Carlsberg Glyptotek in Copenhagen, the Archaeological Institute in Göttingen, the Sculpture Collection of the Dresden State Art Collections as well as from the holdings of the Liebieghaus, including 60 reconstructions from recent years, but also some from the 19th century. A fascinating exhibition, which in the weeks prior to its closure due to the corona virus already fascinated many visitors and which can now be seen again (until 17 January 2021).

And here is a short tour through the exhibition: 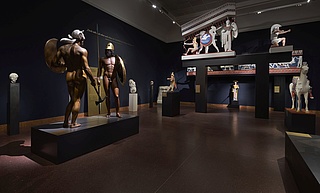