After a forced break of almost 16 months, accompanied by several postponements and extensions of the lockdown, the 72. season of the Komödie Frankfurt opens with "Komplexe Väter" by René Heinersdorff. With Hugo Egon Balder and Jochen Busse, two prominent names have been recruited for the ensemble, ensuring that the theatre's premises will finally be shaken by resounding laughter again after the long break.

And that's what the play is about: three not-so-young men try in various ways to make up for what they missed out on with their daughter. Through a chain of unfortunate circumstances they get in each other's way. The longing to correct life's mistakes, the hope of stopping time, the desire to relive experiences lead to massive confusion and misunderstanding. Is it really about the daughter? Or also about the realization that time does not heal all wounds. Only two strong women are able to prevent the three men from becoming fathers with complexes. René Heinersdorff has cast Jochen Busse and Hugo Egon Balder in the roles of the aging fathers. The two prove once again to be masters of precise timing and let Heinersdorff's punchlines sparkle.

The 3G rule also applies in the "Comedy": a theatre visit is only possible for fully vaccinated, recovered or tested persons upon presentation of the corresponding official proof plus identity card. Proof is considered to be: Vaccination confirmation, medical certificate of recovery or a negative PCR or antigen corona test (not older than 24 hours). 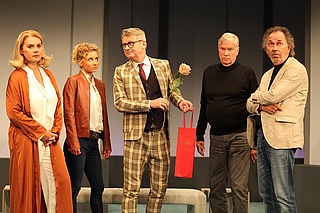