In November there will be football not in, but at Deutsche Bank Park! The cult format DOUBLEPASS is then on two evenings as a guest in the tent palace at the stadium. Here, good entertainment is guaranteed, especially for football fans. Because "Doppelpass" is an institution on German television - for 25 years it has been the talk stage for the most important players in German football. After the sold-out preview shows in mid-August in the Rhine-Main region, the "Dopa" is now finally coming to the fans' homes - and is making a stop in numerous cities nationwide as a stage program. Thomas Helmer will host the show format for the cult show with numerous celebrity guests. In Frankfurt, Helmer welcomes, among others, the following guests:

"Doppelpass on Tour": Time travel with lots of "stories for the football heart"

"Doppelpass on Tour" takes football fans on an entertaining time travel through the past decades: With highlights from German football, the Bundesliga and many amusing and bizarre anecdotes - also from the history of "Doppelpass", since 1995 the stage for the protagonists of German football in the famous TV set under palm trees at Munich Airport.

In the typical "Doppelpass" ambience - the famous phrase pig is of course also part of the party - Thomas Helmer welcomes prominent guests from the football and show business at the respective stations, also with a corresponding regional reference to the venue. With them, he will chat passionately and lovingly in the approximately 90-minute show program about the most beautiful secondary matter in the world: from nostalgic stories to the current, hotly debated topics that move the football nation with its colported 83 million Bundestrainer*innen.

Important info for the 28.11.: Due to the home match of Eintracht Frankfurt on the same day, the parking lot P9 is not available. If you do not arrive by public transport, you can only use the Waldparkplatz. Please plan your arrival a little earlier due to the walking distance. 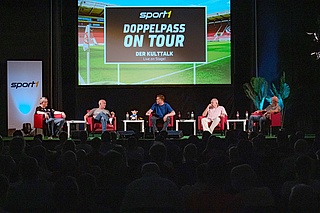