Back in the game: Almost exactly one year to the day after their last performance in front of an audience at the Alte Oper Frankfurt, the Ensemble Modern returns to the Mozart Saal. For at the beginning of October 2020, during the short opening phase of the concert season, the musicians were last able to play in front of an audience at the Alte Oper; it was the only subscription concert in the entire past season. After several streamed dates and online projects, the musicians are now even more hopeful about the return to live performances. As David Haller, percussionist and latest addition to the ensemble, puts it "with joyful anticipation", it's about being able to satisfy "our post-pandemic hunger for art together". In October, the Ensemble Modern will return to the stage of the Mozart Saal with two dates - an evening dedicated to the prize winners of the Ernst von Siemens Music Foundation and a full-length premiere by the composer Johannes Motschmann.

Following a concert on October 2, 2021, Ensemble Modern returns to Mozart Saal just over three weeks later, on Tuesday, October 26, 2021. The concert will be conducted by Peter Tilling, and the team of the SWR Experimental Studio will also be involved. What part can artificial intelligence play in contemporary music? Where and how can human creativity be replaced? Where are the possibilities - and where are the limits of what can be created by hardware and software? These questions have interested composer Johannes Motschmann for many years. With his software AION, which is based on pattern recognition and can shape, reshape and expand music in real time, Motschmann explores to what extent the composer can delegate decisions and still remain a creator himself. AION is also the title of his new work, which takes precisely this play between man and machine as its theme and will be premiered by Ensemble Modern. 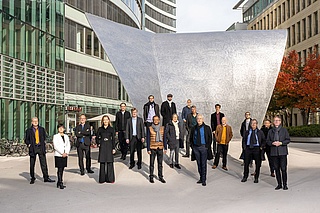