"Great Realism and Great Abstraction" - between these two poles the collection of German drawings of the 20th century in the Städel Museum's Collection of Prints and Drawings, comprising some 1,800 sheets, moves. A selection of around 100 drawings will be presented in a concentrated exhibition from 13 November 2019 to 16 February 2020, impressively reflecting the quality of the collection and its historically evolved focal points.

"Research into the holdings of the Graphische Sammlung in the Städel has a long tradition and is now continued with a pointed selection of German drawings from the 20th century. In addition to Max Beckmann's extensive and internationally significant collection of drawings and the "Brücke" artists, the Städel also houses outstanding works by Paul Klee, Willi Baumeister, Ernst Wilhelm Nay, Wols, Joseph Beuys, Georg Baselitz, Gerhard Richter and many other artists. These expressive works, created until 1989/90, the time of German reunification, show the breaks, but also the continuities of

20. Städel director Philipp Demandt explains: "The changing role and task of the medium of drawing is impressively reflected in the work of the 20th century.

Drawing plays a special role in the 20th century. It has always been a medium of searching, inventing and experimenting. In modernity, it also gains independence and autonomy and becomes a medium of free thought, especially in times of state surveillance and oppression. In its diversity, it reflects not least the complexity of the culture and society of the 20th century, which were subject to rapid change.

"The 20th century is polyphonic, contradictory and extreme, also in art: it was a century of avant-gardes, of artist communities and unyielding individual positions, of realisms and abstractions. The broad spectrum in which 20th-century art moves can be characterized by the two 'poles' that Wassily Kandinsky described in 1911 as fundamental to modernism: 'great realism' and 'great abstraction', the representational and the nonrepresentational. This complementary pair forms a guideline that links the nearly 1,800 works of 20th century German drawing art preserved in the Städel Museum's Graphische Sammlung over generations. The drawings presented in the exhibition and processed in the catalogue trace this pluralism," explains Jenny Graser, curator of the exhibition and research associate at the Städel Museum's Graphische Sammlung.

The scientific research of 20th-century German drawings is thanks to the Gabriele Busch-Hauck Foundation, Frankfurt am Main. In the past decades, this foundation has kindly made possible the art-historical cataloguing of selected drawing collections of the Städel Museum through a continuous commitment. A catalogue will also be published for this exhibition, which for the first time will provide an exemplary overview of the holdings of 20th century German drawings in the Städel Museum. 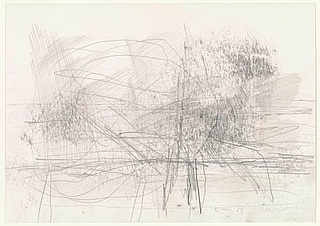