#Improphony. A symphony from the moment

It is just an important time of change, of departure: the young Stegreif.orchester also thinks so. For the Fratopia Festival at the Alte Oper, the orchestra is bringing two contributions to Frankfurt that underscore not only its musical, but also its social self-image. First, on Friday, September 23, 2022, the musicians will present their project "#bechange: feeling" from 8:00 p.m. in the Great Hall of the Alte Oper Frankfurt, and one day later, on Saturday, September 24, 2022, they will move on to the Palmengarten as part of the Alte Oper's "Auswärtsspiel" series at 6.00 clock further into the Palmengarten to a change concert of a special kind.

Sein project "#bechange: feeling" understands the orchestra as a musical examination of the different perspectives on the crises of the time. The Stegreif.orchester has taken up the 17 Sustainable Development Goals formulated by the United Nations to develop a "symphony of change" about them over two years in workshops with people from all the German states. Four productions were created based on works by four female composers from different centuries - in Frankfurt, the reflection of the singspiel "Ordo Virtutum" by Hildegard von Bingen is brought to the podium. Themes are hope, guilt and responsibility in the face of crisis, which the international Stegreif.orchester treats with improvisation, movement in space and in a concert form free of conductors and sheet music. The performance situation in the Alte Oper also contributes to this open form: Especially for the Fratopia Festival, the Great Hall will become an "open space" and will be seated differently for a few days; in addition, the podium will project more into the auditorium, so that orchestra and audience can meet even more directly.

Improvisation is an elementary component of his artistic work: this also applies to the second project, which the Stegreif.orchester will perform as "Auswärtsspiel" as part of the Fratopia Festival at the Alte Oper in Frankfurt. How can music be created in the moment and in contact with the audience? Where do improvisation and composition meet? How can even a symphony be improvised? These are the questions that the program "#Improphony. A symphony from the moment" will answer them. The audience is greeted with a musical introduction and then walks through the four movements of a symphony together with the orchestra at different locations in the Palmengarten. These movements each reflect the character of one location. The concert then concludes in the Palmengarten's Gesellschaftshaus.

Unlike previous Stegreif.orchester programs, #Improphonie does not refer to an existing symphonic work that is recomposed, but is based solely on improvisational concepts. Through improvisation as a collective live composition, a contemporary symphony is created entirely in the moment. 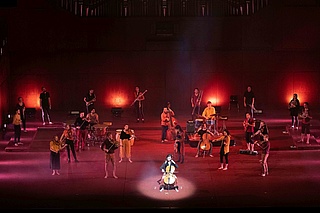