cellophane foil, vaseline, plaster powder, lipstick, color pigments, body lotion, transparent adhesive tape, glass ... - The Scottish artist Karla Black works with classical sculptural materials as well as with substances of daily use and cosmetics, which she does not distinguish between in her space-filling sculptures. They are site-specific sculptures in which the influence of light and the conditions of space play a central role. Although the sculptures are staged directly on site, an important part of the work is already done in the studio. This is one of the many contradictions of Blacks artistic works: She realizes the work in situ and does not want to limit her reaction to the space, but knows beforehand what physical impression the work is supposed to convey. The materials and the way in which the artist forms them into sculptures give them a distinct haptic quality. The surface is tempting to touch, while at the same time the pre-tensioned cellophane foil or the institutional frame prevent contact.

The center of the Schirn rotunda occupies the space-filling, transparent sculpture Conditions (2019), which thus hinders the passage through the publicly accessible space. Black has installed a vaseline landscape there. Coloured glass fragments damage the soft surface of the mass, in which colour particles and traces of their production are visible. The material is held in place by cellophane foil, which is lifted like a kind of bag with transparent adhesive tape in a gentle curve and fastened at the level of the rotunda bypass on the first floor. With the title of her work, Black alludes to climatic and conservational conditions that directly influence the condition and material of an artwork.

The filigree and light effect of the sculpture stands in diametrical contradiction to the material presence of vaseline. The materiality of sculpture is a central theme of the artist. The texture, "the touch" is decisive for the selection of the materials, as well as their creative potential. "I am obsessed with the relationships between material, form, composition and colour, and once I have made a final aesthetic decision, I want it to stay that way forever," says Karla Black. This seems contradictory with regard to the material used. A closer look at Conditions reveals traces of the creative process, the smearing of the vaseline or fingerprints on the film, because the work was created directly with the hands: Rubbing, lubricating, mixing.

In the shade, such artistic markings also become clear in the first rotunda treatment, on whose glass panes Black has applied fingerprints, streaks, smudges with lipstick, eye shadow and other colorants. The artist has combined these works with other works in which she used painted, coloured gauze, glass and mirror surfaces as well as gold. Karla Black sees the direct examination of the material as a means of communication and a means of understanding the world around her.

text source and further information on this event: https://www.schirn.de/fileadmin/SCHIRN/Presse/Texte_deutsch_2019/02_Schirn_Presse_KarlaBlack_Wandtext.pdf 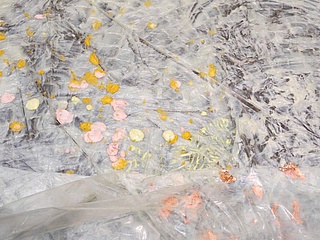