No comedian has ever done that before him: Mario Barth goes with his very first program "Men are pigs, women but also" once again on tour. The occasion is the 20.stage anniversary of the most popular German comedian in 2020. Originally, only one show was planned on 06 June 2020 at the Waldbühne, which is due to the COVID- 19 pandemic moved to 07.05.22.

Mario let his fans decide whether he should play the finale of the current tour "Men are lazy, say the women" or "Men are pigs, but so are women" to mark the anniversary. The vote of the fans was overwhelmingly in favor of the first stage program.

Because there were only a few tickets left for the show shortly after advance sales started and the majority of fans would not have the opportunity to be there at the Waldbühne, Germany's most successful comedian already decided last year to go on a one-off anniversary tour.

Mario Barth: "Crazy that so many people are excited about the idea of playing the first program again. I simply have the best fans in the world! You get a whole special show: men are pigs, women but also 2.0!" 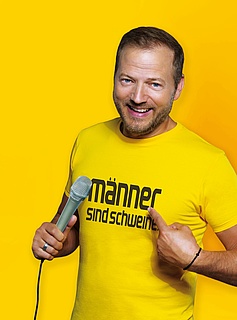