Adapted for the stage by Felicitas Brucker and Alexander Leiffheidt

The story of the citizen Kohlhaas, who resorts to vigilante justice and finally becomes so unconditional in his desire for justice that he walks over corpses, is one of Heinrich von Kleist's best-known and at the same time most complex works. As if in a conundrum, the protagonist and his adversaries appear to us sometimes in the right, sometimes in the wrong, sometimes both at the same time. How is this possible? How many different, even competing justices are there? And how can justice be justified in the last instance?

The experience of the crisis that has kept the world in suspense for almost two years has shown the relevance of these questions - namely, when different constructions of justice collide in a state of emergency. At this breaking point, Kleist describes the phenomenon of an eruptive violence that destroys everything almost without direction or distinction. In her production, Felicitas Brucker traces these modern aspects of a disturbing text. (Text: Schauspiel Frankfurt) 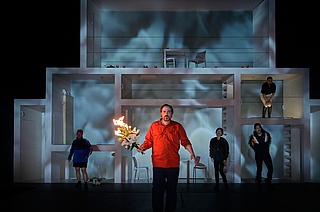