MUNDSTUHL present their current program FLAMONGOS at the Zeltpalast am Deutsche Bank Park. The two comedians Lars Niedereichholz and Ande Werner have been considered Germany's most successful and versatile comedy double act for over 20 years. With their unmistakable tightrope walk between nonsense, cryptic wordplay, crude jokes and political incorrectness, they once again hold up a hilariously funny distorting mirror to society's beery face. Fast.

With them are the most dazzling FLAMONGOS of our republic. Peggy and Sandy, the single dating app experts from the East German Plattenbau with their problems between always trying to integrate refugees and their neo-patriotic offspring. The congenial illusionists Sickfried and Roooy, who wow the audience with state-of-the-art magic tricks. The unbelievably pressureless peace activists of No Pressure, as well as the inventors and leading stars of Kanakcomedy Dragan and Alder, who are dedicated to the status symbols of the present day. Cue: cat photos on Instagram.

In addition, MUNDSTUHL answer the most burning questions of our globallya connected world: How do smurfs reproduce? Why is there vodka with ham flavour? And do ambulances also have to have a first aid kit on board? The two multiple Echo Award winners also achieve a fabulous punchline density in their now tenth stage program FLAMONGOS. To laugh your head off! 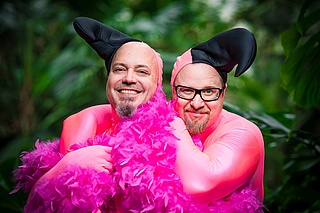