Whether as a producer, songwriter or singer - Nico Santos is undoubtedly one of the greats of the German music scene. With his hits "Rooftop", "Safe" and "Oh Hello", he even became the most successful German radio artist of 2019. And being a jury member on "The Voice of Germany" has further fueled his popularity. So it's no wonder that live performances by Nico Santos are now extremely in demand. After a successful club tour in spring 2019, Nico Santos now finally wants to make up for the dates of his German tour, which had been postponed several times and was planned for early 2020. On 24 October in Frankfurt's Jahrhunderthalle, it should finally work: Nico Santos is finally back live on a stage in our city!

Live, the thoroughbred musician captivates with a unique vocal color and ease. His five-piece band is made up of street musicians, as he seeks to be close to the original. The street is for him the place of truth and this is then perhaps Nico Santos' very own way, which distinguishes him from all his idols. The road of gold is his road because, according to Nico, "The road is the destination, not the destination itself." 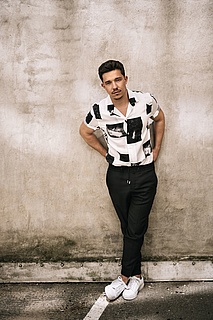