This travel encounter tells the story of a young family discovering foreign cultures and having their second child while traveling.

With their first child just five months young, both parents decide to sell everything in Germany and travel through Asia without a plan. Arriving in Sri Lanka, they begin a journey into the unknown.

An unexpected invitation to a funeral service for the late Tamil Tigers (a militant separatist group that fought for an independent homeland for Hindu Tamils in northeastern Sri Lanka) lands the young family unwittingly in the local newspaper.

The mother's illness with the dangerous dengue fever pushes the young family to its limits and makes unexpected incidents happen. Thus, these exciting encounters with people along the way change their complete view of the world.

In addition to breathtaking landscape shots, "ON THE WAY - WHEN ENCOUNTERS CHANGE" shows the lives of the locals and also some often less beautiful sides of life. People who lost their families in the 2004 tsunami or huge piles of rubbish used as feeding grounds by wild elephants.

The young family works on a coconut plantation along the way, they are invited by a school of monks to stay with them, and eventually give birth to their second child through an unplanned C-section.

In the end, their previously gained insights about life are confirmed. Each person has his or her own unique story, and it is worthwhile to evaluate not only by visible external standards familiar in our Western world. 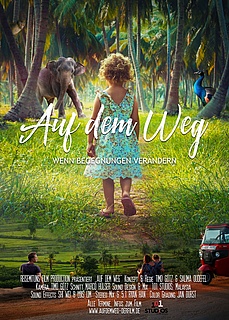 Photo: On the road poster
January 2022