Paulskirche - a monument under pressure

n the hope of Frankfurt as the new German capital, the war-ravaged Paulskirche was rebuilt in 194748 as a potential seat of parliament. Under the leadership of Rudolf Schwarz, a deliberately sober space was created, which stands for the admission of guilt and the democratic new beginning. In the meantime the Paulskirche has become a festival hall from which nationwide debates emanate, but whose architectural quality is seldom appreciated.

The exhibition describes the building history from 1786 to the present day along the respective political and social trends. On display are numerous historical and current photographs as well as design drawings from the DAM collection. Special attention is paid to the conversions in the 1960s and 1980s, together with the accompanying calls for the reconstruction of a pre-war state, which also return today on the occasion of an upcoming renovation. 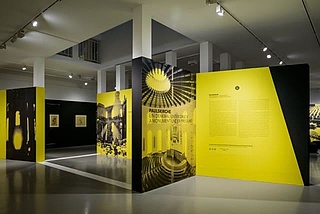