At the Jewish Museum, everything revolves around the theme of "revenge" in Jewish cultural history until the beginning of October. The multifaceted exhibition is accompanied by an extensive catalog, a podcast, an artist-in-residence program in cooperation with DAGESH.Jewish Art in Context, and a film and discussion series.

"Revenge. History and Fantasy" spans cultural history from biblical stories to rabbinic writings, Jewish legends and anti-Jewish myths to Jewish gangs in major U.S. cities. Their point of departure is popular culture narratives in which powerlessness is overcome through the intervention of superior figures or acts of self-empowerment. Their vanishing point is represented by the last testimonies of those murdered and the question of justice after the Shoah.

The exhibition and accompanying program open up a platform for the examination of emotions and traditions that are marked by the Jewish experience of anti-Semitic violence and at the same time seek to overcome it - beyond established role models or expectations of reconciliation. In doing so, they adhere to the self-image of younger Jews in Germany, who do not want their own history to be understood exclusively as a victim narrative and who want to take a position between threat and empowerment.

"Rache. History and Fantasy" presents historical documents and photographs, works of visual art and contemporary commissioned works, handwritten and printed materials, graphic literature, and sound, film, and video works in a scenic exhibition architecture. Items on view include a prop from Quentin Tarantino's film "Inglourious Basterds," pictorial representations of the biblical figures Judith and Samson, ceremonial objects, religious testimonies, and rabbinic writings that interpret, among other things, the biblical verse "an eye for an eye, a tooth for a tooth" as a formula for appropriate compensation. 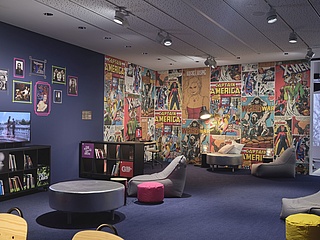