Rice against the dishwasher - The fittest band in the world

Reis Against The Dishmachine are in serious danger of rising. The music-comedy duo has won quite a few regional song slams. Their career became ready for the Bundesliga after NightWash appearances and tours with Die Ärzte biographer Stefan Üblacker (The Book Ä). Recently, the trophy for the winner of the NDR Comedy Contest 2018 is now also neatly polished on the trophy shelf.

To these successes will continue the new program: "The fittest band in the world". A laugh marathon of song parodies that are just plain fun. Music coverett at its best. The two word acrobats leave no doubt that they are in top form. Without a warm-up, they sprint onto the stage and ignite an Olympic bonfire of biblical proportions. Their energy is capable of transforming a room into a stadium, where songs from around the world combine to create an ecstatic singer-songwriter comedy rock show. From Mozart to Mark Forster, from Simon & Garfunkel to the Beastie Boys. From all musical eras, there's something here for everyone (play-along ages from 8 - 80). While Reis Against The Spülmachine already advocated healthy nutrition in their first program "Vitamins for the Bad Game", "The Fittest Band in the World" now also invites you to physical exercise. And on the following day of every concert: "Every evening we rock the show - And then jog off the next morning!" The two are happy to have runners along (especially if someone turns out to be a tour guide who knows the area). Time and meeting point will be announced at the concerts. 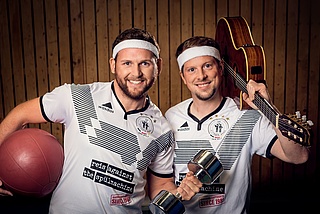