It will probably be a while before the new exhibition at the Deutsches Architekturmuseum (DAM) can be visited. Until then, however, you can view the digital exhibition opening as well as other video and text contributions to whet your appetite for a visit to the exhibition. "Simply Green - Greening the City" will be on display after the museums reopen until July 11.

And that's what the exhibition is about:

Seldom have green spaces been in such demand as they have been since the onset of the COVID-19 pandemic. Especially in the big cities, many people lack the opportunity to escape out of the confines of their homes and into the greenery in close proximity. Not only is the demand in the real estate market for apartments with balconies or gardens increasing significantly, but parks and public green spaces have also become more frequented since then.

The concept of the "stressed city" is therefore also extended to city parks as "stressed green". Especially in cities with millions of inhabitants, the consequences of climate change are becoming increasingly apparent. They are increasingly confronted with increased levels of particulate matter and noise as well as overheating (heat island effect). Recent studies even show a correlation between population density, heat islands and the frequency of COVID-19 infections. At the same time, urbanization continues to advance - cities are not only becoming denser, but are also becoming more sprawling. Yet, according to Richard Sennett in "The Open City," there is no alternative to not building because of climate change, but to adopt new approaches and focus on adaptation and repair of the city.

Greening the horizontal and vertical building envelope is one way to go beyond ground-based green spaces to repair the urban landscape. The "incalculable green" - as many architects see it - brings with it both benefits and challenges. The prejudices that circulate, such as high production and maintenance costs, are contrasted by positive effects that can be proven in figures: Green roofs and facades have an effect on the building itself as well as on the immediate surroundings. Green spaces are not to be understood as a cost factor, but as an added value for the health of people, the city and the environment. Numerous studies prove not only a long-term increase in the biodiversity of flora and fauna, but also the positive change in the urban climate as soon as greenery conquers architecture.

The challenge is clear and has long since ceased to be a vision: the more green buildings become established over a longer period of time and are positively evaluated by users, building owners and urban society, the clearer the message. It is about time - many examples in Germany and worldwide demonstrate that it is possible!

ELEMENTS OF THE EXHIBITION

The exhibition collects resentments against and arguments for the greening of the building envelope and provides practical advice on the greening of existing buildings or new buildings beyond scientific results. It also sees itself as a call and a motor. It aims at an exchange between results of technology research, design, horticulture and users.

Many innovative techniques move in a high-tech mode - but just as many applications prove that effective measures can also be implemented with the use of suitable, simple means and methods. The extensive collection of FAQ's also ranges from results of climate research to issues of funding initiatives and policy commitment to infrastructural greenery.

The DAM is using the exhibition as an opportunity to green a series of courtyards adjoining the exhibition spaces. Until now, the courtyards have mostly been built over for conservation and exhibition reasons. In some cases, nature has taken the initiative and made room for itself. Others have been replanted to show individual systems and methods of greening and to test them in their long-term effect. The planting month of January is only conditionally attractive for plants, but during the duration of the exhibition the courtyards will change: from visible planting systems to rampant green. 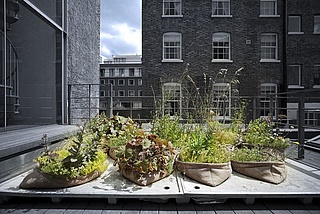