An infamous tale of a Victorian-era barber Benjamin Barker, now Sweeney Todd, who returns home to London after fifteen years of exile to take revenge on the corrupt judge who ruined his life. When revenge eludes him, with the help of Mrs. Lovett, a resourceful proprietress of a failing pie shop, he opens a new barber shop where they plot a unique plan that leads them down a dangerous, thrilling path with deadly and delicious consequences. Mrs. Lovett's luck sharply shifts when Todd's thirst for blood inspires the integration of an ingredient into her meat pies that has the people of London lining up... and the carnage has only just begun!

Famous is the story of hairdresser Benjamin Baker in Victorian England. After fifteen years in exile, he returns to London under a new identity as Sweeney Todd - full of revenge against the corrupt judge Turpin, who once ruined his life. He settles down as a barber and joins forces with Mrs. Lovett, the greedy operator of a shady café. Together they develop a morbid and delicious plan. Inspired by Todd's escapades, she adds a delicate ingredient to her meat pies. Fräulein Lovett's bakery products are now being sold like hot cakes in London... And the slaughter has only just begun!

Text source and further information about this event: https://www.english-theatre.de/sweeney-todd-the-demon-barber-of-fleet-street/ 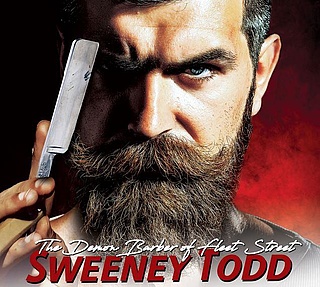