This is madness! - The musical with the hits of Wolfgang Petry

Wolfgang Petry's 25 greatest hits tell a story about friendship and family, love and missed dreams in the musical - with lots of emotion, humour and good humour.

The story begins with a performance by the band "Screamers" around singer Tobi in the pub "Whisky Bill". No coincidence: the singer's first band was also called that, and his career started in the disco "Whisky Bill".

THAT'S AWESOME! takes you on the emotional rollercoaster of four couples whose fates are intertwined. With the hit "Gianna" Tobi woos the spirited beauty, who likes to scold "White of the vulture!" when she doesn't know what to do. Tobi's parents Gabi and Karsten have to think about their own life dreams and don't always agree. But they stick together: Tears of emotion are guaranteed when both sing "Nichts von Alledem" together.

"Verlieben Verloren Vergessen Verzeihn": To no other couple in the DAS IST WAHNSINN! story fits this song better than Sabine and Peter. Their marriage almost has to fail until they realize how important they are to each other. Peter's best friend Wolf and his childhood sweetheart Jessica also take a few wrong turns until they realize, "You're a miracle."

The top-notch creative team has made sure that along with romance and emotion, there's no shortage of atmosphere! You can sing along with "Wahnsinn" and celebrate the "Summer in the City" - the more the party goes on, the longer it takes for the passionately playing ensemble and the live band to finish the "Longest Encore in the World". 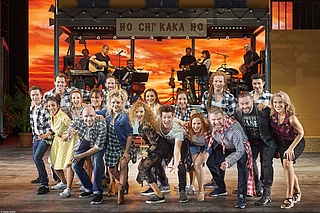