When love is a sin

In this play poets from Persian-speaking countries (Iran, Tajikistan, Afghanistan) and from various past epochs meet to this day. The multi-faceted images in her poems, which reflect her thoughts, her desires and her life stories and at the same time her courage to change, are mostly presented in song form. A dialogue between these women through their poetry connects their fates with each other and with the long, unfinished path of the struggle for emancipation and equality.

Niloofar Beyzaie (playwright and director) Born 1967 in Tehran / Iran. She has lived in exile in Frankfurt am Main since 1985. She studied German language and literature, theatre, film and television studies and education at the Goethe University Frankfurt am Main (degree 1994, Magister Artium) and founded the theatre group 'Daritsche' in Frankfurt in the same year. Since then she has staged and written plays and articles about theatre. In her plays, she takes a socially critical look at Iran and human destinies. The themes and main concerns of her work are: 'the woman', 'the strangeness' and 'the suffering of the individual in the masses', exile as well as adaptation of literary texts to the play and experimentation with the possibilities of documentary theatre and political theatre. Her more than twenty staged plays have been performed with more than 300 performances throughout Europe, the USA and Canada and she is considered one of the most active Iranian theatre makers in exile. She has received several awards from the Iranian theatre and cultural societies in exile such as the 'World Academy of Art, Literature and Media' in Budapest (2005), Audience Award of the Iranian-German Theatre Festival in Heidelberg (2018), 'Stiftung Kulturelles Erbe Pasargad' in USA (2018) and most recently by the "Cultural Society of Iranian Women Vancouver" as 'Woman of the Year' for her many years of theatre work and the thematisation of women in her plays (2018).

A play in Persian language with German subtitles.

Text source and further information about this event: http://www.gallustheater.de/2019/11/wennlie.php 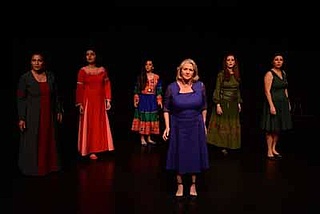