The little Sioux Indian Yakari and his best friend, the horse Little Thunder, gallop to Frankfurt at the end of September. As an animated series, "Yakari" has been one of the most popular German TV events for children for years. Now the little Sioux Indian and his friends are being brought to life in a big horse show. What's special about this show for the whole family, which is unique in Europe, is that it will feature not only real actors, but also real horses. Spirited Appaloosa pinto horses will portray Yakari's animal friends Little Thunder, Big Gray and Fast Lightning.

You will experience the harmonious interplay of humans and animals. Opulent group scenes with up to 12 horses alternate with exquisite horsemanship and soulful moments in which Yakari proves himself as a horse whisperer and wins over the initially unruly Little Thunder. Accordingly, the show is a treat not only for fans of the series, but also for horse and show lovers of all ages!

In total, the ensemble will consist of over 60 two- and four-legged performers. Among them, excellent acrobats and comedians. Yakari's encounter with his totem animal, the Great Eagle, for example, is designed as a daredevil aerial show!

Costumes, sets and storyline are designed in close consultation with the Yakari creators so that the world of the animated series can be coherently translated into reality. At a guest performance in Wiesbaden at the beginning of the year, the children were absolutely thrilled. They joined in the excitement and were thrilled to see Little Thunder galloping by in real life. 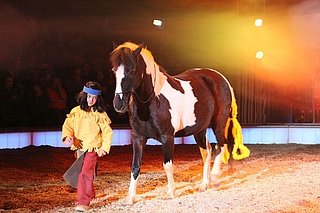