At last, theatre again! A very special premiere is coming up at Schauspiel Frankfurt on October 21: Witold Gombrowicz's famous play "Yvonne, the Burgundy Princess", with whose new production Mateja Koležnik makes her debut in Frankfurt. And this is what the play is about:

Yvonne is silent. And it is through her silence that she provokes others into action. For the prince of an imaginary puppet state, she becomes an object of desire. To the horror of the court, the heir to the throne announces his engagement to the young woman of no rank or standing. An act of nobility, of pity, of mockery? Even a disguised criticism of court society? No one knows. The Prince himself doesn't know. Yvonne is silent. She does as she's told. The longer she stays silent, the more the others speak. The longer she watches, the more abysmal become the deeds of those on whom her gaze falls.

The 1935 play is a mirror turned in on itself, radically demanding and at the same time refusing to make sense of us. Like few other works, it has therefore become a projection surface for social needs for meaning, in which the presence of the future in the present has been mapped again and again in the course of its performance history. 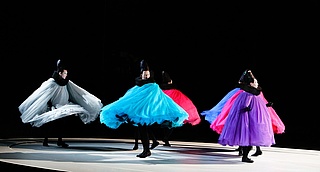