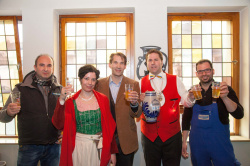 "Very full, aromatic and very balanced with pleasant, light acidity - and an excellent choice", is how cellarmaster Martin Henke describes the apple wine, which was produced on the 18th of January. The family winery Possmann, which is celebrating its 135th anniversary this year, had traditionally and in the meantime already celebrated its 49th anniversary with the award of the "Laternche-Schobbe 2016". For the third time, renowned Frankfurt apple wine landlords, expert guests and the well-known "Laterncher" activists were invited to the annual "Ebbelwei-Prob’".

For the election to the anniversary-Schobbe - 66 years Laternche - the cellar master had again selected five different, excellent Schobbe of the very good vintage 2015 from the barrels of the Kelterei for the blind tasting.

"Here you will find a selection of our best, self-pressed, autumn apple wines from our local region to choose from," explained Senior Günter Possmann in his welcoming speech, not without pride. "I am sure that the selected Schobbe will go down as one of the best in the annals of the Kelterei!

The approximately 50 illustrious, expert guests, among them as always many active members of the Carneval Club Laternche CCL, in addition renowned apple wine landlords and numerous representatives of the press, could not be told the request to try twice and tasted one rib after the other to find out one favourite.

The verdict was very close despite the 40% for the winner Schobbe, because the runner-up Schobbe had almost the same result. So it had to be recounted 3 times until the decision was made. The 18/2 was finally the favourite of the majority of those present and was crowned the winner -Schobbe 2016.

"The 18/2 barrel tastes great and you can drink plenty of it. We will receive about 5,000 litres of these from Possmann by next Monday and pour them to our guests during the sessions. With its full taste and its balance, the Schobbe 2016 should taste great to the 3,500 visitors of our 7 sessions and contribute considerably to the atmosphere during the events", said a visibly enthusiastic Daniel Gottwald, 1st chairman of the Carneval Club Laternche. "It's so good that it not only tastes pure, but also excellent as a squirt," says Martin Henke, who himself had personally favoured this bottle from his deep sandstone cellars.

The award-winning apple wine will be served at all seven Ebbelwei meetings of the CCL, which will be held in the Saalbau Titusforum in Frankfurt from 25 January to 6 February 2016.