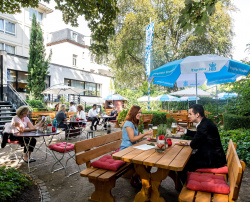 Main Tegernsee - Cozy beer garden in the shadow of the skyscrapers

Life pulsates around the station district. Here commuters rush hectically to work or to their well-deserved end of the day, travellers explore the city from here and thousands of cars meander through the streets from early morning until late at night. Here, of all places, in one of the city's busiest quarters, where opposites collide harshly, is a place to find a relaxing break from the hustle and bustle of the big city during the summer months: The Main Tegernsee Beer Garden at the Savigny Hotel!

In the shade of high-rise bank buildings, a traditional beer garden invites you to linger and enjoy in fine weather. Surrounded by lots of greenery, an extremely cosy ambience has been created here, in which you immediately feel at home as a guest. Noise and stress stay outside and pure deceleration sets in. It doesn't matter if it's just for a short lunch break or for a longer time during a relaxed dinner. As a special feature, Tegernseer Hell is served exclusively on tap. But also other draught and bottled beers, summery aperitifs, wines and non-alcoholic drinks are offered on the rather extensive drinks menu.

A nice atmosphere and a delicious drink in hand are, after all, half the battle. But in the Main Tegernsee there is of course also something against the small or big hunger. And as it is appropriate for a real Bavarian beer garden, specialties like white sausages, pretzels with Obazda, original Wiener Schnitzel or roast suckling pig with dark beer sauce, dumplings and coleslaw are not to be missed. But also crispy garden salad, tender trout fillet or a strong goulash soup spoil here the palate of the guests. And who likes it then also still sweetly, for which there are still delicious desserts like a warm apple tart with vanilla ice cream or apricot pancakes.

So who looks for a small, charming well-being place in the middle of the city and would like to be spoiled with zünftigen or also light Schmankerln, that is exactly right in the Main Tegernsee beer garden. So beautiful can be summer in the city.

In good weather, the beer garden is open daily from 11:30 am. Then there is continuously warm kitchen until 22 o'clock and a changing lunch dish (Mon-Fri 8,50 EUR)

You can also find more info at: https://www.savigny-hotel.com/restaurant/

Special offer: On request, we also organize BBQ evenings from 30 people in the beer garden. (Prices depending on your request 25 EUR per person for a normal BBQ with sausages and co, up to the exclusive BBQ with beef fillet and seafood for 69 EUR per person)

069 Tastings - learning to enjoy properly
LunchNow.com - This is how lunch goes today!