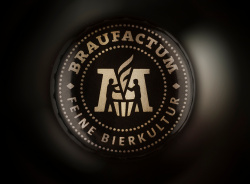 The Journey to a New Taste

Around 5,000 different beers are brewed in Germany. Classic beers such as Pils, Weizen, Alt or Kölsch have a history that goes back centuries in some cases. In the course of time, a perfection has developed that has matured into the norm. At this stage, the fruits of great efforts can be enjoyed proverbially. The cultivation of the traditions handed down requires great know-how and passion. Their possible development requires inspiration and a pioneering spirit.

Dr. Marc Rauschmann is a pioneer. Since his youth, he has been inspired by the idea of not only preserving the cultural asset of beer, but also developing it further. To give expression to the diversity of natural, aromatic raw materials in beer is his understanding of the art of brewing. So what new beer styles can be invented alongside the well-known classics? What would a wheat beer taste like with more hops? How would a beer taste that had been aged in wooden barrels?

When these questions arise, Rauschmann is in a German brewer's position of choice. He is head of product development and quality assurance for the Radeberger Group. His vision of brewing a special beer outside the existing rules nevertheless guides his actions. In his colleague Thorsten Schreiber, now also on the management board of BraufactuM, he meets a like-minded person: Schreiber shares the dream of new brewing methods, new ingredients and new diversity for the German beer landscape. When ideals and goals come together, they are united by the idea of discovering new territory.

Rauschmann and Schreiber are given freedom to experiment by the Radeberger Gruppe, and they design concepts and an initial business model. In 2010, they embark on a journey "to the new taste" and meet the most recognised craft beer brewers in the USA, the UK, Japan, Belgium and Italy. There, brewmasters are breaking new ground, and the craft beer movement has already established itself. You will meet passionate virtuosos of their craft who dedicate themselves to hand-brewed and versatile beer specialties with authenticity, dedication and professional artistry.

Back in Germany, the vision is taking shape: In May 2010, "Die Internationale Brau-Manufacturen GmbH" is founded and the foundation stone for the BraufactuM brand is laid. Full of enthusiasm and filled with their travel impressions, the pioneers experiment, brew and perfect new craft beers. They bundle creations of traditionalists and lateral thinkers, of old and rediscovered, partly newly interpreted secret recipes that revolutionize the understanding of beer. Far from the ordinary, the beers of BraufactuM become surprising taste experiences through special maturing processes, natural ingredients, ample time and virtuosity.

Handpicked and partly rare ingredients such as the Hallertau hop "Saphir" and innovative or revived production processes such as maturing in wooden barrels, cold hopping or bottle fermentation create multifaceted and expressive characters. Due to the BraufactuM cold chain, which is unique in Germany so far, the beer creations are constantly cooled and the individual, aromatic character of the craft beers is preserved. The idea that drove Dr. Marc Rauschmann has become reality: With ten refined own creations and a selection of the world's best craft beers from international partner breweries, BraufactuM has enriched the spectrum of the German beer landscape. Today, the six-member team of passionate comrades-in-arms and enthusiastic beer connoisseurs develops impressive creations that make beer enjoyment exceptionally versatile.

"In a continuous and close dialogue with the world's best craft beer brewers, we inspire and learn from each other," Dr. Marc Rauschmann explains the current connection between the partner breweries. "Our rich experience and intensive exchange enables us to select the most outstanding craft beers for BraufactuM, complementing our own creations. A beer alone is not yet a craft beer, it is always about diversity and variety."
BraufactuM consistently develops the new enjoyment trend and sets trend-setting impulses for the cultural asset beer. The training to become a beer sommelier is in demand like never before, craft beers are not only giving new accents to the upscale gastronomy, more German breweries have joined the movement. More and more German connoisseurs are discovering the aromatic and extraordinary beer specialties and thus a new world of taste for themselves.