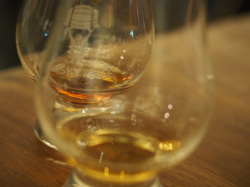 Which is the best whisky in the world?

In the landscape of Scotch whiskies, Irish whiskeys, and other drinks made from barley, corn, wheat, or rye, usually aged in oak casks for at least three years, there are many people who will tell you why this or that whisky is the best. There are whisky books about it and even a "whisky bible" that operate with 100-point ratings and try to qualify whiskies by their own standards. There is no question that this evaluation is always purely subjective when it comes to a tasty drink like whisky. In this respect, we know from the last years and decades that the whiskies which have received the highest scores are not objectively the best, but objectively rise significantly in price. Thus, the Yamazaki aged in sherry casks was still available for less than 100 euros before the corresponding medium went to press, now one leaves well and truly 2,000 euros for it. A pity, actually. However, I like other "competitions" better, where the jurors, who are considered experts in the industry, sort out whiskies they like best in blind tastings in various stages until finally one is determined as the winner. In yet other competitions, whisky enthusiasts and lovers, who however are not allowed to practice the matter as a profession, are asked to give their verdict on the blind tasted whiskies - by the way, only by "nosing" and groping, without swallowing. The best 10% of the submitted whiskies get "gold". A great, interesting and also relevant competition, in my opinion.

Now to the actually important point of this first edition of the whisky blog: "Which is the best whisky for me?", especially when I haven't been dealing with whisk(e)ys that long and intensively and I don't want to invest three-digit Euro amounts. The answer is quite simple: It is the whisky that you personally like well to very well. That will rarely be the same on any given day anyway. Because your personal mood, alertness and other sensations, as well as the time of day and the way and time of eating will have an influence on what you like and taste.

And how do you find your favourite whisky? I can only recommend that you take the time to try different whiskies. And the best way to do that is in three simple ways:

1.) You go to a whisky shop you trust, let them advise and guide you. Taste it!

2.) You visit a whisky tasting, where you can test a nice range of these wonderful drinks with five to six different samples and learn interesting things about distilleries, production, the specific bottling and also about sensory. Don't worry, you don't have to bring any previous knowledge with you! Desire, time and leisure to try new things are enough.

3.) You grab a few similarly whisky-interested people from your circle of friends and acquaintances and go to a whisky fair nearby, which usually take place once a year between September and March. Here in the region the "Whiskymesse Rüsselsheim", the "Whisky & Tobacco Days" in Hofheim and also the "Whisky Time" in Sachsenhausen, which the esteemed colleague Gregor Haslinger started some years ago, should be mentioned and recommended.

In my opinion there are hardly better or cheaper alternatives than the three mentioned above. And now that we're so slowly getting back into the cooler season, when whisky tastes even better than in the height of summer, I can only encourage you to explore what is probably and in my opinion definitely the best drink on the planet. What are you waiting for? SLAINTE!