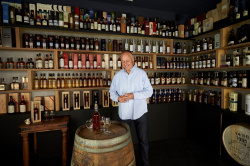 WHISKY FOR LIFE - A paradise for whisky lovers

Good whisky is available in many stores. But a selection compiled with high expertise and a lot of heart, very professional and friendly advice in an almost family atmosphere - that is rather rare to find. In Frankfurt, however, there is a whisky store that offers exactly that. Frank Jerger has not only convinced his customers with his store in Fahrgasse. The renowned trade magazine Der Whisky-Botschafter is also of the opinion that WHISKY FOR LIFE is an excellent whisky shop in the truest sense of the word. If there was 2017 for it still place 3 at the "Germany`s Best Whisky Shop Award", Jerger was happy about the second place in 2018. Quality just prevails!

The reason for this award is quickly found as soon as you enter the store. The interior radiates an inviting warmth and even the layman is enough a quick look at the shelves to realize that someone is acting here who has a clue about the matter and wants to offer his customers only the finest drops. For Frank Jerger, it is quite clear that only whiskey that he considers to be particularly good is sold in his store. There may be a few well-known brands among them, which can also be found on local supermarket shelves. But in Jerger's store, whiskey lovers will also find many special bottlings that are rarely found.

In addition to numerous Scotch Single Mats from distilleries such as Glendronach, Kilchoman, Balvenie or Laphroaig are also excellent bottlings of independent bottlers such as Adelphi, AD Rattray, Maltman, Malts of Scotland, The Whisky Chamber, The Whisky Cask or Whisky Doris, as well as World Whiskeys from Australia, India or the USA in the assortment. Gin, fruit brandies and calvados, cognac, grappa and rum can also be found at WHISKY FOR LIFE. Frank Jerger is particularly proud that his store has been the official importer of MICHEL COUVREUR whiskies for southern Germany since January 2017. In Fahrgasse, he offers all currently available bottlings of the various whiskies stored in sherry casks. In addition, WHISKY FOR LIFE is also a proud "Laddie Crew Germany" member since 2017, a kind of embassy for the fabulous Islay distillery. Thus, once or twice a year, own Laddie Crew Single Cask Bottlings in cask strength can be offered here!

But at WHISKY FOR LIFE you can not only buy whiskies, but also learn more about these noble drops and the whiskey culture. Tastings on various topics are regularly offered here and "private tastings" are also possible. All this makes WHISKY FOR LIFE just one of the best whiskey stores in Germany and the first address in Frankfurt for all whiskey lovers from the entire region.

Or just take a look around the online store at: https://www.whiskyforlife-shop.en/

Cocktail enjoyment with loft ambience at IN-LIVE Cocktail ..
With SHARING PLATE on a culinary discovery tour through Fr ..