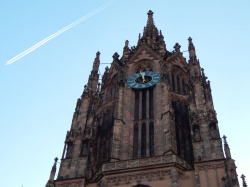 Frankfurter Stadtgeläute - A concert with 50 bells

It is always a very special event, for which numerous Frankfurters gather on and around the Römerberg: The great Frankfurt city ringing. This worldwide unique interplay of vin 50 bells of the ten inner city churches provides many a goose bumps and has become a real community experience. Especially on Christmas Eve, families, friends, but also many people who celebrate Christmas alone meet here to listen to the sound of the bells together. They are offered a unique, half-hour concert.

The Leonhardskirche (6 bells), the Karmeliterklosterkirche (4 bells), the Alte Nikolaikirche (4 bells) at the Römerberg and the "dribbdebach" (southern side of the Main) situated Dreikönigskirche (5 bells) then join the common choir.

Finally, when the ringing of the Kaiserdom (9 bells) rises, you can almost physically feel the sound waves.

Because the "Gloriosa", with its almost 12000 kilograms the second largest bell in Germany, overlaps with its mighty voice not only its eight smaller colleagues in the cathedral.

The most popular locations are the Hauptwache, the Liebfrauenberg, the Paulsplatz, the Römerberg and the Eiserne Steg.

Especially on Christmas Eve, thousands of visitors flock to Frankfurt's city center for the "Großes Stadtgeläute".

&middot; Saturday before Whitsun (from 4.30pm)

History of the Frankfurt town bell

.In 1954, Professor Paul Smets of Mainz, commissioned by the Frankfurt magistrate, conceived the concept of coordinating all the individual bells of the ten inner-city churches to create a unique sound experience.

However, the tradition of ringing the city bells goes back a long way to 1347.

For the solemn funeral mass for Emperor Louis the Bavarian, the common peal of all Frankfurt's churches rang out for the first time.

The bells of Frankfurt's churches were also rung on later occasions such as the elections of kings and emperors or Goethe's 100th birthday in 1849.

In May 1856, the Senate of the Free Imperial City of Frankfurt decided to ring the bells on high church festivals - effectively the forerunner of the "Great City Bells" of today

The City Bells on CD

The CD "Frankfurt am Main produced by Axel-Gerhard-Kühl-Verlag: Glocken, Glockenspiel, Großes Stadtgeläute" contains not only a tour under the Great City Bells, but also sound samples of individual bells and 3 choral movements. The CD is available, among others, at the Dommuseum and at CD&acute;s at the Goethehaus (Am Salzhaus 1)