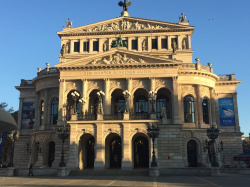 The Alte Oper - Much more than just a Frankfurt landmark

The Alte Oper is one of the most photographed landmarks of the city. The Opera House, which opened in 1880 and was destroyed in March 1944, has been far more than just a beautiful photo backdrop since it reopened on 28.08.1981 at the latest. The elegant concert and congress house offers about 400 events per year, from concerts in the fields of classical music, jazz or pop, to special concerts and workshops for kids or large musical guest performances, to congresses or magnificent galas such as the Hessian Film and Television Prize.

The Alte Oper, a representative building from the Gründerzeit, found its origin in a donation from wealthy Frankfurt citizens. On 20 October 1880 the opera house, which was built in seven years according to the plans of the Berlin architect Richard Lucae, was inaugurated. The performance was Mozart's opera Don Juan. Among the guests of honour was Kaiser Wilhelm I.

Until its destruction at the end of the Second World War, the Frankfurt Opera House experienced eight directors, numerous premieres, renowned soloists and world-famous composers. The latest operas by Wagner were performed, names such as Bizet, Leoncavallo, Puccini, Mascagni, Smetana, Richard Strauss and Humperdinck shaped the programme.

After the war, there was a long-lasting discussion about whether the Alte Oper should be rebuilt in its original state or whether the ruins should be demolished.

The then Mayor of Frankfurt, Rudi Arndt, even wanted to blow up the opera. In the vernacular it was given the name "Dynamit-Rudi". Arndt later asserted that he had never seriously proposed the demolition.

The plan failed due to resistance from the citizens of Frankfurt. A citizens' initiative was founded and collected 15 million marks in donations until its reopening.

So the Alte Oper was reopened on 28 August 1981 with Gustav Mahler's 8th Symphony. <x>>BR</x>
The wood-panelled Great Hall with its excellent acoustics can hold approx. 2500 spectators.

In addition, there is the Mozart Hall with approximately 700 seats, which is used for chamber music, and a number of smaller halls for congress purposes.

The gastronomy also meets the high standards with the Café "Rosso" in the entrance foyer and the "Opéra" restaurant in the Old Foyer.

Today the Alte Oper has once again become the cultural centre of the city with over 300 concerts and about 50 events annually, including glamorous gala evenings such as the Opera Ball.

The generously laid out opera square invites you to linger

The Lucae-Fountain, the benches and the trees remind you of an Italian piazza, especially when the weather is nice.

Street cafes all around give ample opportunity for leisure.

Young and old meet here to gossip, be seen or just to cool their feet in the fountain when the weather is nice.

It is also used regularly for outdoor concerts and sporting events.

The Alte Oper's extensive concert and event programme can be found on the Internet at www.alteoper.de 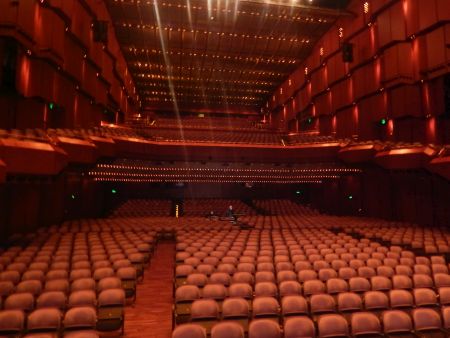 The Tiger Palace - A Frankfurt Institution
The Autokino Frankfurt Gravenbruch - A visit to Europe's o ..