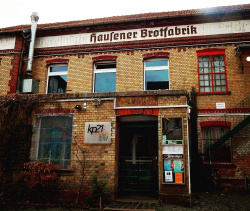 The Bread Factory - The Cultural Center of Hausen

In a city like Frankfurt something is always changing somewhere. And usually it is so that old is simply torn down, so that something new can arise there. So it's all the nicer when very special sites are preserved and simply put to new use. For example, the site in Hausen, where bread was baked until the early 1970s. Since 1981, the site of the Hausen bread factory has been a place of culture and encounter, which is now used by various institutions. Two stages, an event hall, two catering businesses and psychosocial projects have breathed new life into the bread factory.

The centrepiece of this is, of course, Kulturprojekt 21, which holds concerts, readings and club evenings on the premises. While the focus used to be on jazz and world music, the musical spectrum has expanded considerably over the years. Pop, singer-songwriter, ska, rock - almost all styles are represented in the Brotfabrik's calendar of events. In addition, there are regular events such as the minus50plus party or Noche de Salsa, which have long attracted a loyal regular audience. But also readings or performances of the Freie Autoren Theater can be experienced regularly in the Brotfabrik.

Next to some social institutions like a center for integral body therapy, gastronomy is also responsible for the livening up of the area. On the one hand there is the kp21, the restaurant in the bread factory, which offers small dishes like sandwiches or chili con carne as well as various salads, pasta, fish or meat dishes, and seasonal cuisine. And on the other hand there is the cosy Melo Bar, where besides hot and cold tapas like dates wrapped in bacon, gambas al ajillo, olives with feta cheese or nachos with guacamole and sour cream, there are also salads and burgers on the menu. And every now and then there is live music in the Melo Bar.

In the last 37 years, a lot has changed in the bread factory. But one thing has always remained the same: it is a very atmospheric place where you can enjoy culture, but also simply enjoy being together. A very good example of how the old can also be used to create the new.

Traditionally, a nice summer festival is also celebrated here every year with all the resident institutions. So also on August 12, where there will be live music, workshops, delicious food and much more. More info HERE

You can find more info at: www.brotfabrik.de

The Eintracht Museum - An Institution for Frankfurt Sports ..
The Seehotel Niedernberg - Pure relaxation in the village ..