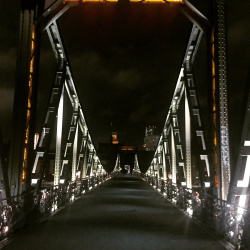 The Eiserne Steg, as the most important pedestrian connection from "hibdebach" to "dribdebach" (from the old town to Sachsenhausen opposite), was completed in 1869.

The neo-Gothic, 170 m long pedestrian bridge consists of riveted steel trusses with two stream bridge piers. It was built and operated by a private company.

Crossing the Main was once only possible for a fee (1 kreutzer once or 6 gulden a year).

In 1886 the footbridge came into municipal ownership, and from then on the crossing was free of charge.

Shortly before the end of World War II the bridge was blown up.

As early as 1946, the Eiserne Steg was rebuilt according to old plans and using the previous construction.

The bridge had to be renovated from scratch.

However, it wasn't woodworm that was the cause, but iron pitting.

Corrosion gnawed away at the steel over the decades, and it was finally replaced in 1993 at a cost of over DM 16 million. The wooden footbridge was installed as a replacement. But just over a year later, the Iron Footbridge shone again in its former glory.

Now it also has two lifts and is now also passable for wheelchairs and prams without any problems.

From the middle of the footbridge, there are magnificent views of the skyline, the Nice Gardens and the Museum Embankment.

Because of its location but even more because of its cityscape-defining silhouette, the Iron Footbridge has become a charming landmark of the Main metropolis.

Our tip: From the <link http: www.bootshaus-dreyer.de _blank>Bootshaus Dreyer you can comfortably enjoy the skyline and the sunset while drinking Stöffche. 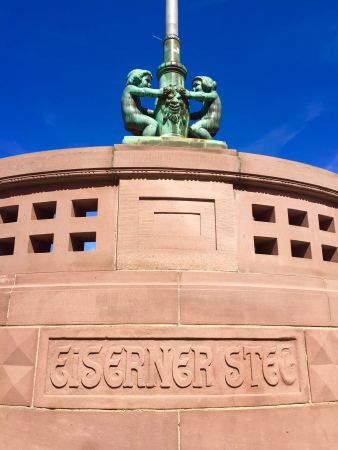