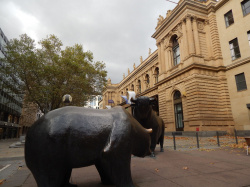 The term "stock exchange" originates from the 15th century in Belgian Bruges and is derived from the Latin "bursa" for pocket, purse.

The roots of the Frankfurt Stock Exchange go back to the privilege granted by Kaiser Ludwig the German in the middle of the 9th century to hold an annual autumn fair.

Frankfurt had become very prosperous at the beginning of the 16th century and was able to establish itself as the centre of the wholesale and banking business.

In order to counter the misery of the unmanageable monetary system caused by the many princes, duke's and king's dukes, trade fair merchants came together in 1585 and fixed uniform exchange rates: the Frankfurt Stock Exchange was born.

Already in the 18th century trading in bonds in Germany was interesting. In 1820, securities of the Austrian National Bank entitled to dividends were traded on the stock exchange for the first time.

After the 1935 stock market reform, the position of the Frankfurt Stock Exchange grew more and more. The final breakthrough came with the end of the Second World War and the division of Berlin. From now on, national and international investors were attracted to the Main.

In front of the building the symbol animals of the Börsianer stand: Bull (for bull) and bear (for bear).

The bull is with its upward pointing head a symbol for rising prices at the stock exchange. If he's in charge, stockbrokers can look forward to a bull market.

In return, the bear stands for falling prices: a bear market rules.

With a total turnover of around EUR 5,200 billion (2000), Deutsche Börse AG strengthened its position as the world's third-largest stock exchange for securities organized on a stock exchange - behind the New York Stock Exchange and the Nasdaq.

Deutsche Börse AG was the first major international marketplace operator to go public itself at the beginning of 2001.

In the course of globalization and the increasing importance of trading on the Internet (small investors), stock trading will increasingly be handled via the Xetra computer system.

The main advantages of computer trading are perfect settlement, short reaction times, flexible markets and the internationalisation of trading.

After 426 years, classic floor trading ended in the "Alte Börse". Since 23 May 2011, all trading on the Frankfurt Stock Exchange has been controlled via the electronic system Xetra.

The head office with administration and computer trading Xetra moved to Frankfurt-Hausen in mid-2000.

In order to save trade tax, Deutsche Börse moved around 1,600 employees to the neighbouring "tax paradise" of Eschborn in November 2010.

Only the computer centre and custodian for securities remained in Frankfurt-Hausen.

Although the stock exchange hardly employs any staff in Frankfurt, the Main metropolis remains the official seat of Deutsche Börse.

The Visitors Gallery of the Frankfurt Stock Exchange is open to visitors every trading day from Monday to Friday. After presenting a photo ID, anyone can get a taste of stock market air here free of charge.

A telephone registration at least 24 hours in advance is absolutely necessary for safety reasons. For larger groups a longer lead time is necessary.

Introductory lectures on stock exchange, floor and Xetra trading will take place three times a day at 10.00, 11.00 and 12.00 in German, English or French. An Xetra presentation is included.

Visiting the gallery and the introductory lecture are free of charge

Further information on the Internet: www.deutsche-boerse.com