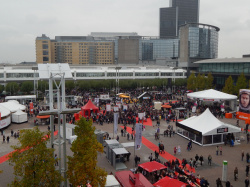 The Frankfurt Trade Fair - The oldest trade fair in the world

The historical roots of the Frankfurt Trade Fair date back to 1240 when Emperor Frederick II granted the city the trade fair privilege. This makes it the oldest fair in the world.

Today, the Frankfurt Fair is the third largest in the world.

The fairgrounds in western Frankfurt are located in the districts of Bockenheim and Westend.

It has direct motorway access (A 648) and parking spaces at the Rebstock site.

It can be reached by public transport via the Festhalle/Messe underground and tram stops and the Messe S-Bahn station.

The short distances benefit some 42,000 exhibitors and around 2.6 million visitors who flock to the 32 trade fairs and 16 flagship exhibitions each year.

Some of the world's largest and most important trade fairs, such as the International Book Fair, the biennial International Motor Show (IAA), the Music Fair and the Ambiente spring trade fair are based here.

The oldest building on the exhibition grounds is the Festhalle, built in 1909. Affectionately called "Gudd Stubb" by the people of Frankfurt.

The cantilevered steel and glass dome structure, over 40 metres high, was completed in 18 months to a design by Munich architect Friedrich von Thiersch.

At the time it was built, the Festhalle was the largest domed structure in Europe.

After World War II, the Festhalle, badly damaged by a major fire and air raids, was rebuilt and reopened for the Spring Fair in March 1950.

In addition to trade fairs such as the Book Fair and the IAA, six-day races (1951 to 1983), equestrian tournaments, the ATP World Tennis Championships (1992 and 1995) and, since 1970, musical events have attracted crowds to the hall.

Even today, the Festhalle is a popular venue for concerts by prominent artists and sporting events, such as the running-in of the Frankfurt Marathon. Of course, it is also used for trade fairs.

In the 1980s, the fairgrounds essentially took on their present form. The postmodern buildings of the Galleria and the Torhaus (148 m) were built.

A landmark of the Main metropolis and an architectural jewel is the 256.5-metre-high Messeturm, built in the Art Deco architectural style (construction period: 1988-1991).

The shape of the Messeturm, designed by architect Helmut Jahn, is reminiscent of a pencil.

From 1991 to 1996, it was the tallest skyscraper in Europe. And for the people of Frankfurt, it remains the most beautiful.

In front of the Messeturm is the moving 23-meter-high, 32-ton artwork "Hammering Man" by US artist Jonathan Borofsky.

It depicts the moving silhouette of a worker hammering an object with a hammer and is considered a symbol of labor.

In 2009, the construction of the new exhibition hall 11 with attached entrance building was completed.

Messe Frankfurt GmbH is present as a "Globel Player" in more than 150 countries and generates sales of around 424 million euros (2007) with more than 1400 employees.

It has 29 subsidiaries, five branch offices and 48 international sales partners.

For information on which trade fairs will be held in Frankfurt in the coming months, see our trade fair calendar

The Messe Frankfurt on the Internet.