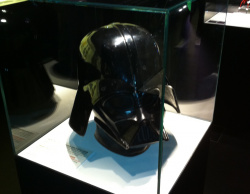 The German Film Museum - founded in 1978 and opened in June 1984 - is dedicated to the medium of film, whose history and present, aesthetics and impact it presents in a variety of ways. The significance of the medium of film, cinema history and milestones of international film are naturally honoured here. The Deutsches Filmmuseum also wants to give its visitors an understanding of film practice. Especially for younger visitors there are regular workshops and offers that teach the craft of filmmaking.

In the beautiful permanent exhibition there are quite a few exhibits that make every film lover's heart beat faster. Among them, for example, the mask of Darth Vader or a lavishly restored ALIEN. In addition to the exciting exhibits, there are also operable models of historical equipment and interactive media stations on around 800 square metres. All of this, as well as the large film projections, make it possible to experience the fascination of the medium of film in this part of the museum alone.

For young film lovers in particular, there are great workshops and other opportunities to learn more about the making of films or to make an animated film themselves.

The special exhibitions, which are usually conceived in a very original way, round off the offer. The in-house cinema presents not only film classics but also the whole spectrum of artistically important film productions. And it is not only worthwhile for cineastes to take a look at the museum shop, which is particularly well-stocked in the area of literature.

Integrated into the German Film Institute with its collections, archives and scientific projects, the museum offers a place for intensive examination of the moving image.

You can find all further info at: www.deutsches-filmmuseum.de