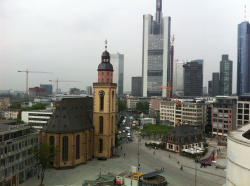 The Hauptwache is the city center and the most famous square of the Main metropolis. The square is the real heart of Frankfurt's city centre.

The baroque guardhouse, which gives its name to the whole square, was built in 1729-30 by the city architect Johann Jakob Samhaimer as a military station.

The Hauptwache was the seat of the city militia and also contained a prison.

Among others, the councillor Senckenberg (brother of the naturalist) and the notorious "Schinderhannes" were imprisoned here.

The Hauptwache gained historical significance through the storming of the guard on 3 April 1833, when about 50 young revolutionaries wanted to give a signal for the establishment of a republic.

Since 1904, the historic guard building has housed the popular Caf&eacute; Hauptwache. This, and especially the adjacent Normaluhr, became the most famous meeting place for dates in the city centre.

In 1944, the Hauptwache was completely burnt out after heavy bombing.

In 1954 it was reopened and in 1967, during the construction of the subway, it was first completely dismantled, and then a year later, rebuilt above the subway station.

Also the Caf&eacute; Hauptwache was reopened. In the summer you can watch the hustle and bustle around the center of Frankfurt in the garden.

On the square An der Hauptwache, at that time first called Paradeplatz, then Schillerplatz, all important tram lines already converged in the past.

Even after the construction of the subway, the Hauptwache with its underground station remained one of the city's most important traffic junctions.

The square has been redesigned several times. Its current shape is marked by a large opening in the ground, which is also called "das Loch" for short by the people of Frankfurt.

As part of a large-scale plaza beautification, the hole to the B level will be closed.

The resulting square is to regain its pre-war name "Schillerplatz" and the statue of the poet Schiller, relegated to the Taunusanlage, is to return to the centre of the square, analogous to the Goethe monument.

The Katharinenkirche (Frankfurt's main Protestant church) on the south side of the square was built in 1681 by Melchior Heßler.

This is where Johann Wolfgang von Goethe was baptized on August 29, 1749.

From the Hauptwache depart Zeil, pedestrian zone and one of the highest-turnover shopping miles in Germany, Liebfrauenstraße, Roßmarkt, Steinweg, Schillerstraße and Große Eschenheimer Straße.

Maintower, Stock Exchange, Goethehaus, Paulskirche and Alte Oper are only a few steps away. And it is also not far to the historic old town around the Römerberg

The Eiserne Steg - One of the most famous pedestrian bridg ..
The Paulskirche - Cradle of Democracy