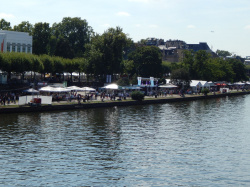 Frankfurt's Museumsufer is one of the most important locations for museums in Germany. The diversity and quality of the museums in particular accounts for Frankfurt's good reputation among art connoisseurs.

On the Sachsenhausen bank of the Main, between Eiserner Steg and Friedensbrücke, are 13 museums that were rebuilt or newly constructed by world-renowned architects during the tenure of Frankfurt's former head of cultural affairs Hilmar Hoffmann between 1980 and 1990.

This showcase art and culture mile cost and still costs the metropolis on the Main quite a bit.

Originally built in 1993 only as a temporary replacement for the Eiserner Steg, the Holbeinsteg quickly won the hearts of Frankfurt's residents as a postmodern, colorful "Freischwinger".

And so the suspended construction of steel cables, struts and poles by architect Albert Speer simply stayed put.

Moreover, the Holbeinsteg represents the optimal connection from Frankfurt's city centre to the Museumsufer, and has long been an integral part of the cityscape.

The Museumsufer has three more highlights to offer:

On the last weekend in August, the Museumsufer celebrates itself at the three-day Museumsuferfest. On both banks of the Main, there is a boisterous folk festival atmosphere.

This is accompanied with culinary delights from all over the world and usually also with lots of sunshine! The weather god seems to be a friend of art and culture ;-)