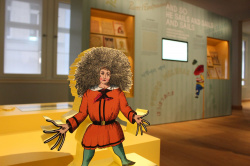 The new Struwwelpeter Museum in the heart of Old Town

In spring 2019, the Struwwelpeter Museum in the West End closed its doors to prepare for a very special move: Moving to the new Old Town. In the house where Goethe's Aunt Elba once lived and from whose windows the poet prince described the hustle and bustle of the Hühnermarkt in "Dichtung und Wahrheit" (Poetry and Truth), tribute is now being paid to another famous son of the city: the Frankfurt physician and psychiatrist Heinrich Hoffmann (1809-1894). Almost 175 years after he invented "Struwwelpeter" for his son just a few hundred meters away from the rebuilt Old Town, the museum could be reopened on September 23, 2019 in a festive ceremony by Lord Mayor Peter Feldmann.

Now the world's largest collection of exhibits on the classic picture book is also once again open to the public in two handsome half-timbered houses on Hühnermarkt, reconstructed according to historical models. And it does so in an exhibition space that, at 600sqm, is almost twice as large as in the old museum. "We've done it," said Beate Zekorn-von Bebenburg, who has been running the Struwwelpeter Museum for almost 30 years, with relief as she presented the new house to members of the press and the first enthusiastic children. "The new museum is full of stories to discover. It is a place to learn, play, reflect and engage in conversation for all generations," the museum director said, describing the house.

In addition to familiar exhibits, there are also many new things to discover. The museum now offers enough space for special exhibitions and special events. Also, in addition to the popular playroom, there is also the possibility to interactively dive into the world of Struwwelpeter via digital stations. Of course, the great success story of the book will also be a theme. More than 35 million copies have been printed in German alone. Struwwelpeter "speaks" more than 40 languages and 80 German dialects. And it has spawned numerous imitations and parodies, several examples of which can be seen in the interactive exhibition. Rare book exhibits, kitsch and art or even parodies are intended to appeal to visitors of all ages. And visitors can also learn a lot about Heinrich Hoffmann himself: portraits, letters, sketches and first editions present Heinrich Hoffmann as an author and illustrator, psychiatric reformer, politically interested citizen, loving family man and convinced Frankfurter.

At the ceremony, the Lord Mayor highlighted not only the importance of Heinrich Hoffmann, but also that of his most famous creation: "Struwwelpeter is part of Frankfurt's cultural heritage. I am therefore delighted that the museum has now found its place in the heart of the city and wish it all the best at its new location!" said Feldmann, adding, "Struwwelpeter is like Frankfurt: a bit ornery, but with its heart in the right place." The city leader singled out one area in particular: "I am particularly pleased about the interactive hands-on floor for children. It is living &sbquo;culture for all'. So it's good and meaningful that the city supports the Struwwelpeter Museum from its budget."

In addition to the exhibition space on the 1st floor, the 2nd floor offers space for special exhibitions, with "The Cuban Struwwelpeter" featuring works by Cuban artist Noa, who has transferred Hoffmann's old illustrations wittily and colorfully into the present of the tropical island, kicking off from Sept. 24, 2019 - March 31, 2020. On the ground floor, a lovely museum shop invites visitors who don't want to see the exhibitions to pay the Struwwelpeter Museum a visit. In the shop you can buy some really nice things, like Struwwelpeter mugs, funny magnets (the Hans-guck-in-die-Luft once and today is just great!), about Struwwelpeter squeaky ducks up to the different Struwwelpeter editions. In the foyer you can also take a selfie with one of three large, illuminated figures.