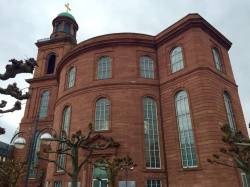 The Paulskirche, originally an Emporenbau (1789-1833), is as "Cradle of German Democracy" the national symbol for freedom and democracy in Germany par excellence.

On May 18, 1848, the first freely elected National Assembly convened in Frankfurt's Paulskirche.

The following months were marked by work on a constitution for a unified Germany, although this later failed due to opposition from Prussia and Austria.

The ensuing uprisings to enforce the constitution were put down, and parliament was finally dissolved by force of arms on May 30, 1849.

Services were again held in St. Paul's Church from 1852 until its destruction in 1944.

On March 18, 1944, the Paulskirche burned down completely after a bombing raid and was rebuilt after the war as Frankfurt's first historic building.

On the centenary of the National Assembly, it was ceremoniously reopened on 18 May 1948 as the House of All Germans.

The ceremonial address was given by Fritz von Unruh. His "Rede an die Deutschen" was a critical analysis of the Nazi era.

Since 1948, the Paulskirche has thus no longer been a church, but is mainly used for exhibitions and state or municipal events.

Most famous is the awarding of the "Peace Prize of the German Book Trade", which is awarded on the occasion of the Frankfurt Book Fair.

The first two book fairs were still held in the Paulskirche in 1949 and 1950, after which it was moved to the exhibition grounds.

On 25 June 1963, US President John F. Kennedy visited Frankfurt and also spoke in the Paulskirche. In his speech, he pointed out that "no other building in Germany can lay more justified claim to the honorary title of the cradle of German democracy.

For the 1200th anniversary celebrations of the city of Frankfurt in 1994, the French artist Philippe Petit stretched a 300-meter-long rope between the Paulskirche and the cathedral and performed a thirty-minute high-wire walk on it. At a height of 60 to 70 metres, he mimed important events from Frankfurt's history.

In 1998, the Paulskirche was once again in the public eye on the 150th anniversary of German democracy.

Various plaques and monuments were added to the exterior façade of St. Paul's Church over the years:

&middot; memorial for the victims of National Socialism

&middot; Plaque for Theodor Heuss, the first Federal President of the FRG

The Hauptwache - The Heart of Frankfurt
The Senckenberg Natural History Museum - One of the larges ..