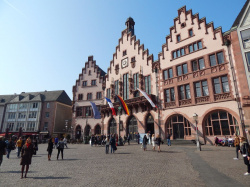 If you think of places of interest in Frankfurt, the Roman mountain always comes to mind first. No wonder, as countless groups of tourists pass through here every day, making the fountain with the Justitia one of the most photographed motifs in the city - alongside the skyline and the euro sign in front of the former seat of the ECB. No wonder, since emperors have already been crowned here, important political decisions made, fairs held, lavish celebrations celebrated or shining football heroes received.

The Roman has been the city hall of Frankfurt am Main for over 600 years and with its characteristic triple gable front is one of its landmarks. Three former patrician houses from the 14th century form the striking facade of the Roman with their Gothic triple gable front. The City Council of Frankfurt acquired these in 1405 and converted the trio with eight other patrician houses into a representative town hall.

In the central building are the shopping and exhibition halls used until 1846, above which rises the Kaisersaal with its 52 imperial pictures.

In the Second World War the Roman was heavily destroyed and rebuilt after the war, but not true to the original.

The facade was renewed twice in the last decades. In the years 1974 and 2005 it regained its neo-Gothic appearance of 1900.

Like the neo-Gothic facade, the balcony was only added after the 1900 conversion. The balcony is used today as it was then as a representative stage for state visits and the like.

Today the Römer is the seat of the city council and the mayor.

Also several offices, among other things the registry office, are accommodated here. The marriage in the historical town hall is again in.

The Roman hill as the centre of the old town enjoyed in the 16th century the reputation of being the most beautiful place in the holy Roman Empire of German nations.

The history of the site, which was initially simply called Berg or Samstagberg, can be traced back to the Staufer period.

The place got its present name in the 15th century, The heyday of the Römerberg lay in the late Middle Ages and in the early modern period, when the elections and coronations of the German kings took place here in addition to the important Frankfurt fairs.

On a night of bombing during the Second World War, the entire old town with its more than 2000 half-timbered houses and the Römerberg sank into rubble and ash. Only the house Wertheim at the Fahrtor was spared. The Römerberg was restored after the end of the war.

On the west side of the Römerberg stands the historic city hall of Frankfurt, the Römer. In the middle of the square stands the Justitia fountain.

The south side dominates the early Gothic Old Nicholas Church and the modern entrance building of the Historical Museum with the statue of Emperor Charlemagne.

built between 1981 and 1984. The Old Nikolai Church, originally built as a royal court church, was the centre of urban alms-giving in the 15th century, followed by the Council Church.

Today the Old Nicholas Church is the oldest Protestant parish church in the Main metropolis.

At the most important church festivals, she takes part in the Great Ringing of the City.

Since the Middle Ages, the "Gudd Stubb", as the Frankfurters affectionately call their Römerberg, has been the stage for important events. At imperial coronations a large public festival took place on the square.

Since the 20th century the Römerberg has been the scene of numerous major events.

From 1932 to 1939, the internationally renowned Römerberg Festival was held here every summer.

Since the seventies, major demonstrations and victory celebrations of successful sports teams have also been held on the Römerberg.

And also the kickers of the 1st FFC Frankfurt, the Frankfurter Eintracht and the FSV Frankfurt showed their fans here.

A highlight since 2002 is the finish of the "Eisenmänner-/Frauen" at the Ironman Frankfurt.

Music events and folk festivals, such as the Mainfest or the Stöffchefest, also take place here, and one of the most beautiful and largest Christmas markets in Germany attracts numerous visitors every year. 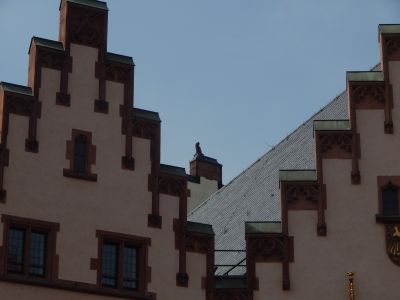