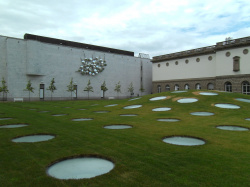 The Städel Museum - Highlight on the Museumsufer

Founder of the Städelsches Kunstinstitut is the Frankfurt merchant Johann Friedrich Städel (1728-1816).

With his will he founded the institute in 1815 and at the same time bequeathed it his fortune and his considerable art collection.

The founder set as his task the establishment and expansion of a collection of high quality, to which every citizen has access.

In 1907, the City of Frankfurt founded the Städtische Galerie, which is integrated into the Städelsches Kunstinstitut and is devoted primarily to modern and contemporary art.

The art school established at that time was separated in 1923 and is now the Staatliche Hochschule für Bildende Künste.

In 1878 the Städel Museum moved into a new building on the Schaumainkai in Sachsenhausen, which was extended in 1915-20, rebuilt after damage in the war until 1966, and received an extension in 1990.

In 2012, the Städel extension opened its doors for the presentation of contemporary art.

The new, light-flooded exhibition hall, placed under the Städel Garden, brings around 3.000 m<x>ampersand</x>sup2; of additional exhibition space, doubling the scope of the Städel's collection presentation.

The Städel Museum, centrally located on the Museumsufer, has since grown into a world-class art collection.

In total, the Städel Museum's collection currently comprises some 3,100 paintings, 660 sculptures, over 4,600 photographs and over 100,000 drawings and prints.

The museum thus presents an overview of 700 years of European art history - from the early 14th century through the Renaissance, the Baroque and Classical Modernism to the present day.

In its anniversary year 2015, the Städel presented itself at the height of its times with numerous high-profile exhibition and research projects. The museum is placing a special focus on the expansion of its digital education offerings.

In the context of its Digital Expansion, the Städel is developing numerous new narrative forms that offer a freely accessible, innovative and alternative offering to the classic museum visit - thus paving the way for the future of the institution and the next 200 years of the Städel Museum

The German Film Museum - film history brought to life
The Eiserne Steg - One of the most famous pedestrian bridg ..