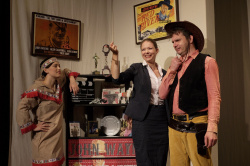 The Stalburg Theatre: With John Wayne into the new season

After the summer break, the Stalburg Theater offers several revivals of popular plays such as "Arsen und Spitzenhäubchen", "Rapunzel Report" or "Wer kocht, schiesst nicht". But there is also a very special premiere on the programme. Lutz Keßler, who has already staged "Gut gegen Nordwind" here - another revival in this season - has written the comedy "John Wayne war nie in Offenbach" especially for the Stalburg Theater. True to the theater's credo that there should be good entertainment, but no cheap thigh knockers, the new play offers a lot of humor, but deals with quite serious topics. But these are served pleasantly light, so that the visitor doesn't have to be ashamed of his laughter.

At the centre of the "modern Western" is John Wayne fan Hans-Jürgen (Thomas Rausch), who leads a satisfied single life in his old apartment in Frankfurt Nordend. But then an online auction held at his workplace becomes his undoing. Hessischer Rundfunk, for which he worked as an online editor, gives him notice without notice. But that's not all, suddenly the bailiff (Undine Schmiedl) of the district court Hünfeld is standing in front of his door to collect 800 Euros, for which Hans-Jürgen has bought an obviously fake order at an auction. And then he learns that his apartment is to be luxuriously renovated. No job, the prospect of an exorbitant rent increase that he will not be able to afford and the bailiff - how can he get out of this mess? The only question that remains is: What would John Wayne have done…

Keßler raises many topics in his play, which he comments on with sometimes very biting sarcasm, but sometimes also with subtle, profound humour. But in the foreground is the desperate attempt of a man not to lose everything that is important to him in life. Which plan he is planning not to fall into precariousness is of course not to be revealed at this point. Only this much: not only the bailiff, who has always dreamed of a completely different life, but also the daughter of his former boss, played by Iris Reinhardt-Hassenzahl, occupies a big place in it.

Which brings us to the great strength of the piece: The cast! The three Stalburg professionals Undine Schmiedel ("Gut gegen Nordwind"), Thomas Rausch ("Familie Hesselbach", "Arsen und Spitzenhäubchen") and Iris Reinhardt-Hassenzahl ("Sex. Oder so") harmonize perfectly with each other, especially because their characters are so completely different. When the nervous western nerd, the frustrated but slowly thawing bailiff and the wonderfully over-twisted luxury brat collide with their hipster anglicisms, then the good interplay of the three actors makes for some really funny moments. Although all three characters are obviously dysfunctional on different levels, as viewers you quickly take them to your heart and wish them all the best in the end. Whether or not this really succeeds will be revealed to you immediately at the Stalburg Theater.

With minimal support but maximum commitment, the small theater in Frankfurt's Nordend district has so far managed to survive in the city's fiercely contested cultural scene. It was always important to the makers of the theatre to pay their guests high quality at fair prices and their artists reasonable wages above the minimum wage level. Despite an average occupancy rate of 85%, which many other theatres can only dream of, the Stalburg Theatre is now facing an end due to constantly rising costs. In order to avoid this, support would have to be slightly increased. But also every guest who loves the small Frankfurt theatres can support the preservation of this theatre with his visit. And in the really varied programme that the Stalburg Theater has to offer again this season, there is something for every taste. So, just study the schedule and then save tickets for "John Wayne was never in Offenbach" or one of the other pieces. 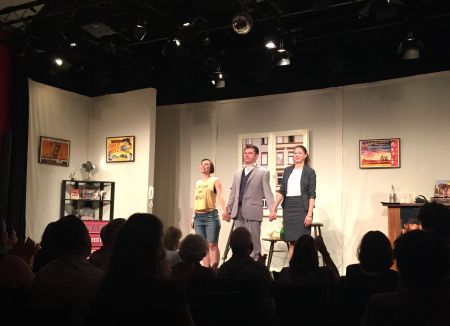 You can find the game plan here: www.stalburg.de