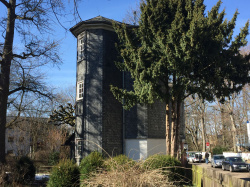 The Willemer House - In Goethe's Footsteps in Sachsenhausen

Goethe is omnipresent in Frankfurt. You can follow in the footsteps of the great poet not only in the city center in the Goethehaus. There is also a very special "Goethe place" in Sachenhausen: The Willemer-Häuschen. From the former garden house, a wonderful view of Frankfurt could once be enjoyed. In the tower-like cottage, which was purchased in the early 19th century by Johann Jakob von Willemer, Goethe met Marianne von Willemer, with whom he had a special friendship until his death.

The classicist garden house, which was reconstructed after being destroyed in World War II, will be open again this year for the first time on Sunday, July 12. From then on, it can be visited by interested people again until October 18 every Sunday from 11 am to 4 pm free of charge. The view of the Mühlberg from the balcony is particularly beautiful. Inside the house you can dive into the time of Johann Wolfgang von Goethe by means of letters, poems or drawings. In any case, a really nice and recommendable destination!