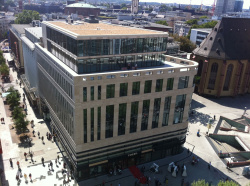 One of Frankfurt's oldest and most important main streets is the 1.2 kilometer long Zeil.

It was initially located outside the Staufer city wall and served as a cattle market.

Frankfurt grew and expanded and the Zeil became the city's most important west-east link.

It owes its name to the originally one-line development.

End of the 17th to middle of the 18th century the Zeil developed into Frankfurt's most elegant residential and business street. Here stood the most renowned hotels and the finest inns.

In the air raids of 22 March 1944, the buildings on the Zeil and its surroundings were almost completely destroyed.

Today, the Zeil is one of Germany's highest-turnover shopping miles.

The western part of the road, also known as the West Line, has been a green pedestrian zone since the 1970s and is bordered by two large squares, the Homepwache in the west and the Konstablerwache in the east.

The eastern part of the Zeil, the Ostzeil, extends from the Konstablerwache to the Friedberger Anlage.

Since 1989, a well-attended producer market with regional and international specialities has taken place on Thursdays and Saturdays at the Konstablerwache.

The Konstablerwache is also used for events of any kind.

The Zeil is subject to permanent change.

Housing structures that are no longer up to date and long-established companies have to make way for modern, globally operating department store groups and retail chains.

The MyZeil shopping centre, an imposing steel and glass structure, together with the neighbouring office tower, the adjacent hotel tower and the reconstructed Thurn und Taxis Palais forms one of the most important inner-city projects in Europe - the PalaisQuartier. The futuristic shopping temple with around 100 shops further enhances the Zeil's attractiveness as one of the shopping streets with the highest turnover in Germany.

The initiative "Zeil Aktiv e.V." meets the problem of "lifelessness after business hours and on Sundays" in many inner cities and shopping streets with a varied programme of events.

The Water Park: A small oasis with history
The Museumsufer - Frankfurt's Art and Culture Mile