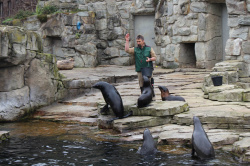 Zoo Frankfurt - An experience for the whole family!

The Zoological Garden, founded in 1858, is one of the oldest zoos in the world and was founded as a civic foundation to provide a place of recreation for the inhabitants of the rapidly growing city.

The zoo already had a remarkable animal population at the turn of the century. Everything was destroyed in 1944 in a single night, only 20 animals survived the hail of bombs.

"A place for animals" in the middle of the city. Professor Bernhard Grzimek (1909-1987) made Frankfurt Zoo known worldwide and synonymous with modern animal husbandry through his commitment to the reconstruction of the zoo after the war and his television programme of the same name.

On the 95th birthday of the "Animal Professor" an Africa Camp with the famous single-engine Do 27, the "Flying Zebra", a hut, a high stand and a Land Rover was set up to commemorate his commitment to the endangered animal world of Africa.

At his 100th birthday. The city of Frankfurt celebrates the honorary day of the animal professor with various exhibitions and events.

The nature conservation scientist Prof. Manfred Niekisch took office as the new director of the Frankfurt Zoo on 1 March 2008.

The Frankfurt Zoo offers breathtaking flora and fauna on only 11 hectares of cramped inner city space. The zoo accommodates about 4400 animals in 534 species.

At Grzimek House, day turns into night. Animal species whose waking phase is when we humans sleep can be seen there.

This artificial day-night shift offers the visitor the unique opportunity to observe animals, which one knows otherwise only from pictures or from the television.

In the Exotarium an exciting world journey from the polar sea to the Amazon awaits the visitor. The bird halls are unique in Europe. The free flight hall is particularly impressive.

In addition, there is a rhinoceros and a giraffe facility as well as the animal house for children.

In the grotto of the seal facility, the most modern in Europe, dwarf sea bears can be observed under water.

A special attraction is the cat jungle. Tigers, lions and other big cats cavort here in a "natural" environment.

Another highlight is the "Borgori Forest", which opened in June 2008 after two years of construction.

After decades in cramped cages the great apes now have more space. There are many opportunities to play with around 200 trees, on which ropes are stretched.

The name "Borgori" consists of the inhabitants of the monkey forest: Bonobos, orang-utans and gorillas.

In addition, the new "Gibbon House" was opened in September 2009. At the Großer Weiher a modern greenhouse style building has been built, which offers the monkeys various possibilities for climbing and hanging.

One of the latest attractions is "Ukumari Land", opened in July 2014, the new large enclosure for spectacled bears and howler monkeys, which immediately follows the new zoo entrance

The traditional Frankfurt Zoo has been struggling with lack of space for a long time.

An animal-fair attitude of elephants and other large animals is no longer possible in the narrow city zoo.

But there are despite the lack of space and in times of empty coffers also positive prospects.

The penguins get a bigger facility next to the exotarium, which is currently under construction and will be finished in 2018.